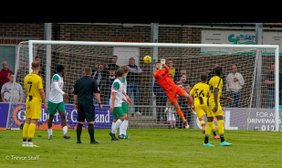 Bognor fell to their first defeat against a strong league outfit in Burton Albion with 3 goals unanswered from the Rocks.

This proved a great workout for the 14 players representing the Rocks for the first time at Nyewood Lane since November last year.

The Rocks boasted just 14 players compared to over 25 at Littlehampton as they lined up against Jimmy Floyd Hasselbaink's Brewers.

Bognor almost let it in with a swift movement on the right and a cross by Tom Hamer to an unnamed triallist striker in the box but he slid his attempt well wide.

Bognor had their first chance on 6 minutes. Jordy Mongoy combined with Jason Parish who played it back to Mongoy and with players lined up in the area he decided to shoot over the bar from the left side.

Kayne Diedrick-Roberts won a free kick on the counter for Bognor. But the free kick was blocked by the wall. Then Ashton Leigh picked out Mongoy who turned to shoot it from distance but it bounced wide of the left post on 14 minutes.

A slip up by Craig Robson saw a trialist for Burton have another shot, which was bravely blocked by Keiron O'Hara who was standing in for Amadou Tangara in the Bognor goal for the first half on 18 minutes.

Then Hamer found his man in the box and on the volley he hit another chance directly at O'Hara.

Robson played it wide to Mongoy who found Joe Hancott on the overlap but his cross was gathered high in the air from the goalkeeper.

Bognor went behind on 26 minutes. Omari Patrick received the ball from a short corner before firing it into the area and it was a triallist who smacked it in with his first touch.

Conor Shaughnessy had an effort from distance which was nicely punched away by O'Hara soon after as Bognor needed something to get back into the game.

Davies did well to burst into space on the right picking out Ashton Leigh unmarked in the area with a deep cross.

He decided to hit the ball on the volley but it flashed over the crossbar on 36 minutes.

Danny Rowe did well to create space in the box before shooting but O'Hara saved it at his near post, pushing the ball away.

Rowe was again involved in a chance when he turned instantly in the box but was stopped again by O'Hara who gathered it after fumbling it initially from the strike.

Rocks bought on James Crane, Alfie Lis and Ben Mendoza in the second half freshening up various areas of the pitch. This didn’t stop the second goal going in for Burton on 47 minutes. A mistake by stand in Calum Hawkins saw him smack his clearance off Terry Taylor and bounced back over him and into the net.

A defence splitting pass saw Joe Powell in but his low shot was diverted away by the right foot of Hawkins on 50 minutes in an uneventful half down the other end for Bognor.

Taylor smashed it well over the bar from distance and then Lucas Akins struck wide in another low attempt for the visitors in a dominant second half against a fresh new eleven from Burton.

Akins squared the ball to Kane Hemmigs and he curled the ball from outside the box though narrowly wide of the right post 68 minutes.

On 82 minutes Burton made it 3-0. A swift cross from Taylor found the onrushing Louis Mollet who headed it home powerfully.

This finished the tie off with the Brewers showing their superiority in this fixture.

Bognor now move onto the remaining pre-season fixtures starting with Havant & Waterlooville away next Saturday 17 July, 3pm kick off.