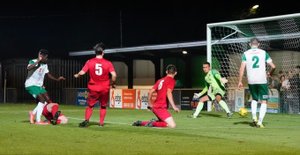 Rocks ran out 4-1 winners in a rare mid-season friendly against Pagham at Nyewood Lane. Nathan Odokonyero netted two, with Charlie Bell and Joe Cook scoring the other goals in a strong performance from the hosts.

Bognor gave a start to young Harrison Brook as Pagham were welcomed under the lights for this friendly game.

Charlie Bell fired the ball forward for James Crane. He ran down the right flank. He passed the ball back into the area and Brook was there with a strike on his first touch which was blocked. It fell back out to Nathan Odokonyero but he struck it wide on the rebound.

Odokonyero received a decent cross from the left by Joe Hancott. He headed that across the goal but Lewis Boughton pushed it around the post and the defence cleared the danger.

Odokonyero won a freekick following a throw in from Crane. Crane played it quickly with a pass to Bell who played it back to the skipper whose strike was deflected away.

Craig Robson chipped the ball forward for Hancott who was brought down just outside the corner of the box. Though Bell's curling strike from the angle was hit straight at Boughton.

Bell did well to run inside the box to cut the ball back to Odokonyero. The striker had his back to goal before turning and smacking his chance wide of the right post.

A nice ball out to Brook from Bell set up another Bognor chance. Brook's shot was blocked before it fell to Odokonyero who got the ball stuck under his feet before turning and seeing his strike from close range steered wide by Boughton.

Brook combined with Crane on the right. A one-two move ended with Crane shooting low and it was comfortably saved by the goalkeeper.

Calvin Davies burst through before Bell got a head on Odokonyero's cross but it spun up in the air for Boughton to gather.

But Bognor conceded the first goal on 20 minutes. Following a quick move down the middle, R Morey rounded Amadou Tangara on the edge of his box before slotting the ball into an empty net.

Ethan Robb played Brook in on the right. He swirled a cross in for Odokonyero whose shot was instantly blocked by the Pagham defender, D. Jelly.

Tangara was called into action to deny J Longford with his strike. Davies cleared away J Barnes' low corner at the near post.

Rocks pounced on the counter to win a freekick. Davies played it forward to Brook who was blocked and then Odokonyero's shot on the follow up was straight at Boughton. Bognor were creating chances but not capitalising on them to this point.

Bognor got their equaliser on 31 minutes. Crane burst down the right hand side before squaring it inside the box to Odokonyero who hit it in with his first touch low, hard and into into the net.

Odokonyero was closing the defence down. Brook cut the ball back after playing it to Bell with a return pass just inside the box before Bell left fly with a high curlig strike which only just flew over the bar.

Robb won a corner as he got a deflection off a defender to win a corner. The short ball to Davies was closed down as the chipped forward ball was headed out by the Pagham defence.

Hancott played a neat ball through to Jordy Mongoy who cut inside after beating his marker. He sped on a few more paces before curling one towards the back post and Boughton managed to get fingertips to it before the ball crashed off the post on 39 minutes.

But in the same minute it was a swift move down the right which saw Rocks take the lead. Brook used his pace before passing it along the deck on a plate for Bell who struck it early and high into the net from the edge of the box - another spectacular from the midfielder.

Robson had to hack away a low cross from the left to concede a corner. Tangara gathered the high ball in though as Rocks were now settled after taking the lead.

J.Williamson did superbly to block Mongoy with his chance as it looped over the crossbar. This following a good pass from Hancott who set him on his way.

Davies passed it out to Brook who was having a busy evening on the right. He crossed it quickly into the box but it was just out of the reach of Odokonyero to end a positive half from the Rocks.

Robson and Crane were replaced at half time by Jake Flannigan and Kayne Diedrick-Roberts.

Brook and Mongoy were continuing to threaten as the second half kicked off as Pagham were pinned in their own side of the field for much of the restart.

Joe Cook managed to blast one chance from distance which was well saved by the substitute goalkeeper, G Kelly.

But it was on 51 minutes when Rocks got their third goal. Odokonyero let fly with a chipped strike which dipped just below the bar as he saw the goalkeeper off his line from the right side of the pitch.

In response, C Theobald dug out a shot from just outside the box of which Tangara watched sail over his crossbar.

Mongoy was causing more problems down the other end. Twisting and turning he beat his man again but he swirled his left-footed effort wide of the near post with with his left foot.

Mongoy ran down the right flank before crossing it fiercely narrowly high and wide of the goal.

Barnes won a corner off an attempt at a cross which ricocheted off Flannigan. Though Flannigan headed out Morey's curling corner kick as payback.

Morey won a freekick with a good turn of pace. Cook got stern words from the referee but the short freekick broke down and was cleared.

Hancott went to ground as Bognor defended the freekick but had to be replaced soon after though as Crane replaced him to come back on as a precaution on 71 minutes.

There were heated discussions after Barnes and Davies clashed. Tangara also looked upset after another player lashed out during the outcome of the incident. The referee asked both players to leave the field without handing out any bookings. So both teams were now playing with ten men.

Flannigan did well to get to the byline before whipping a cross in. Odokonyero was there but he deflected it wide under pressure from the defender.

Diedrick-Roberts had the ball in the net when he slid it low under the goalkeeper but he was already called offside so it didn't count on 80 minutes.

Bognor extended their lead on 82 minutes. Cook played it out wide to Flannigan who got a low cross back to the defender who neatly swerved it low into the bottom left corner of the net swiftly with the side of his boot.

G Radmore ran beyond the Bognor defence before spotting Tangara off his line. His shot from way out on the left only just flew over the bar.

Diedrick-Roberts won a corner but Bell's lofted cross was easily headed back out.

Then Crane passed inside from the left to Odokonyero who turned instantly before firing wide of the right post from outside the area.

Robb did well to halt Radmore's turn in the box after a swift cross from the right by the visitors who still were battling hard to create rare chances.

Sherlock's cross was high and looping. The ball fell to Brook who squared it to Diedrick-Roberts and he took a few steps before belting it low and wide of the left post as the game soon came to an end.

This game allowed Robbie Blake and Jack Pearce a look at some of the younger fringe players and get some minutes of football.

Rocks travel to Bowers & Pitsea next on Saturday 23 October with kick off at 3pm, on the back of another win and glad to be returning to competitive action.