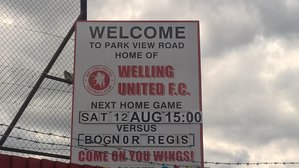 Rocks managed a 3-3 draw away to Welling United and remain unbeaten. A steadfast defensive effort saw Bognor take a share of the points.

The Wings were on lookout for their first points of the season, whereas Bognor were hoping to add to their tally, which stood at 4 points before kick off.

The main absentees for the Rocks were Dan Beck and James Crane. Chad Field returned to action and Joe Lea was awarded a starting place.

Rocks were sporting yellow socks as they stepped onto the field - a change from their usual white as Welling were sporting those colours.

Jack Parkinson pumped an early lofted pass into the area but it bounced harmlessly to Dan Lincoln on 2 minutes.

Ben Jefford's long throw found Joe Healy on the left and his cross was closed down by Sami El-Abd. Calls for a handball were ignored moments later.

Ollie Pearce combined with Calvin Davies down the left wing who then fed Doug Tuck who won a corner.

The kick was taken by Pearce but it was headed away by Ian Gayle but Ben Swallow followed up with another shot blocked seconds after.

A deep forward lofted pass by Jamie Coyle was nodded on by Tom Bradbrook but his knock on was intercepted by Lincoln.

Bognor took the lead on 9 minutes. Jimmy Muitt received a lofted pass by Pearce from the left and he beat his man as the ball flew over the defender and then all he needed to do was divert it beyond goalkeeper Dillon Barnes to give Bognor an early lead.

But straight away Welling had equalised on 11 minutes. A pinpoint corner by Connor Dymond picked out the tall Coyle who nodded it over Lincoln and into the net.

Pearce lost the ball in his own half and Bradley Goldberg capitalised on this to run through and quickly shoot low into the bottom left corner beyond the outstretched Lincoln on 13 minutes just to add to the frustration.

Goldberg was alomost set through again with a chipped pass with Lincoln stranded and then Bradbrook's cross found no one in the area as Welling looked confident in attack.

Bognor gave the ball away twice in a few seconds as Dymond blasted another chance over the bar with his left foot on 18 minutes.

Tuck cleared one off the line on 19 minutes as Goldberg hit one low at goal following a corner before Muitt went to ground down the other end in the area and was turned down for his penalty appeal.

Bognor gave away a silly foul out on the right near the byline and Dymond's freekick was good for Bradbrook but he headed it over on 21 minutes.

Following a throw by Davies the ball was worked down the line to Tuck and from an acute angle his low shot was bundled into his own net by Barnes at his near post on 22 minutes.

Pierre Joseph-Dubios got round El-Abd before letting fly with an effort. Lincoln dived to his left to save it. The following corner was headed towards goal but Harvey Whyte got in the way.

Tuck fed Pearce on the left and his run and shot was well pushed out by Barnes and the danger was cleared by the hosts.

Following this a Dymond freekick swung agonisingly through the heart of the Bognor area missing all of the Wings players.

Swallow was tripped up on the right and won a freekick. Pearce took it on 32 minutes which curled at a good height across the goal but no one got a head in to direct it towards an open goal.

Welling won a corner on 39 minutes. The corner kick by Dymond was headed away at the near post by Muitt. Shortly after this Gayle wasted another chance for the hosts as he blasted one high over the bar.

El-Abd did well to shut down Goldberg's advance on the counter as Bognor had to endure two more minutes added on time to end an exciting first half of football.

The sun was out as the teams returned to the field for the second half.

Healy's early low cross along the deck almost fell to Joseph-Dubios but Bognor defended it well and won a goalkick despite claims from the home dugout that it should have been a corner.

Goldberg found Bradbrook with an incisive pass inside the box but Bradbrook's strike with the outside of his boot flashed wide on 50 minutes.

On 52 minutes some intricate play from Pearce and Muitt saw Pearce try a low effort but Barnes blocked it with his legs.

Then Tuck was on the worst end of a late sliding challenge by Dymond who went into the book.

Coyle's curled cross found Gayle in the area but heading it from underneath he could only divert his chance over the bar on 55 minutes.

Davies teed up Pearce on the left and his cross found Swallow but his stubbed shot into the turf was easily gathered.

Healy chested the ball down for Dymond but he spun his instant shot on the bounce over the crossbar.

Heath bravely blocked a chance and shouts for a handball were ignored by the referee.

Welling brought off Joseph-Pierre and on came Olu Durojaiye on 60 minutes.

Dymond hit another at goal which deflected off Heath and spun up, only just flying past the goal.

Lincoln saved a Goldberg chance soon after as it was all Welling midway through the second half.

Goldberg was shown a yellow card for a late challenge on Muitt who had ran on the counter attack.

Goldberg was looking for another goal as he curled it wide on 67 minutes from the edge of the area.

Durojaiye's cross was headed back into the path of Healy who belted it over on the volley as Welling were desparate to get their first win of the season.
A through ball set Goldberg through who only had Lincoln to beat but the goalkeeper denied him with a block.

Bognor got their third goal on 70 minutes. A wonderful ball across the area by Muitt found an unmarked Pearce who poked it in from close range.

Christian Nanetti replaced Parkinson on 71 minutes for the hosts.

But on 72 minutes it was all square as Healy pounced on a loose ball in Bognor's half to fire home into the bottom right corner.

Nanetti's cross picked out Bradbrook but his header fell straight to Lincoln on 74 minutes.

Goldberg's deep cross from the right picked out Dymond who hit the side netting with his attempt beyond the back post.

Swallow swung one in to an unmarked Muitt but he decided against hitting it first time and ended up defending the clearance.

Tuck received a yellow card after a late challenge by the midfielder as play on was ignored by the referee.

Nanetti then went to ground in the box and instead of a penalty, received a booking for simulation.

Nanetti put one on a plate for Healy but all he could do was direct his low shot at Lincoln.

Swallow got around his marker to cross but the defensive header out found Joe Lea who skied it over on the volley with his left boot.

Whyte was then booked for a foul on 83 minutes as Welling continued to attack.

Gayle missed a sitter after Pearce headed a deflected shot off the line. Pearce required treatment after the incident as he put his body on the line to keep Bognor level.

Pearce came off holding his back as he was replaced by Jimmy Wild on 85 minutes.

Swallow looked to be shoved off the ball by the outrushing Barnes as he was out of his area but the referee ignored the claims for a foul.

Goldberg smashed another agonisingly wide on 87 minutes when it looked easier to get it on target.

Chad Field bounced a crucial header out for a corner after Nanetti's attempt. The corner by Dymond was well caught by Lincoln.

Whyte combined with Lea to run in and beat everyone before shooting low towards the bottom right corner but it was a good diving save by Barnes who denied him right atthe end.

Bognor did all they could to hold onto the draw as Welling were still in search of their fist win of the season.

The final whistle blew after four a half minutes of stoppage time.

Rocks are home next against Whitehawk on Tuesday 15th August, with a 7.45pm kick off.