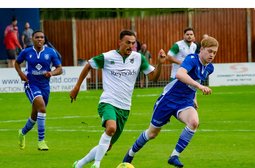 Not A Good Start To Season.

The Rocks will be regretting mistakes made as they lost their first game of the season with only Dan Smith's 74th minute penalty the only consolation.

Bognor travelled to Bishops Stratford for the their first game of the BetVictor Premier League season.

Rocks welcomed in Hadji Mnoga into the side on loan from Pompey as Joe Dandy was out through sickness.

Jimmy Muitt got Bognor on the attack inside the first minute. He played it to Smith who shrugged off his marker before squaring it to Doug Tuck. He, in turn, picked out Stuart Green on the left but his cross was cleared.

James Crane's cross was dug out by the Stortford defence before Tommy Leigh's header back inside was gathered by goalkeeper Frederick Burbridge on 4 minutes.

Benjamin Worman was denied with his lowly driven effort after Jamie Cureton’s chance was deflected out to him at the edge of the area. Petar Durin was well placed to save.

Smith beat his man with a nutmeg before running through one on one. He placed his low effort wide of the left post on 7 minutes though, with the shot stopper beaten.

But Bognor went behind when Ashton Leigh's back pass was played to Durin but he gifted the pass out to Luke Callander on 9 minutes before he quickly composed himself before slotting it low with Durin out of position.

Keaton Wood committed a foul on 11 minutes just outside the D. Cureton got a slight deflection off the defensive wall and it flew out of play for a corner. Worman’s kick was well caught by Durin in the follow up though.

Durin gathered another ball headed in off Cureton's right sided corner soon after on 16 minutes.

Bognor were trying to work the ball cleverly in the opposing half but Smith lost it allowing the Blues to boot clear on 17 minutes.

Durin was called into action again stopping a low effort from Johnville Renee after good work from Worman on the right to beat the offside trap moments later.

Muitt slid the ball wide of the right post in response. Bognor were trying to find the final man with Green and Harvey Whyte with passes going astray in the final third.

Cureton was running onto a lofted pass but Durin was brave to come out of his goal to deny him on 25 minutes.

Green was fouled on the right, winning Bognor a freekick. Muitt whipped it in dangerously and Whyte was there but a defender got in the way.

Mnoga won another freekick in an identical position after powering forward. A short freekick ended with A Leigh passing it onto the edge of the box before it fell out to Tuck who hit it low but this was deflected into the arms of Burbridge.

Cureton made it 2-0 on 32 minutes. Bognor failed to clear their lines and the ball was played square to Cureton who hit it first time into the top left corner, leaving Bognor a lot to do for the remainder of the game.

Whyte was deemed to have fouled the goalkeeper after a looping and deflected A Leigh cross from the left flew into Burbridge's hands on 34 minutes.

With the ball looping up in the swirling winds it was A Leigh who was impeded by the attacker in the air and Rocks got a freekick.

On 38 minutes it was Mnoga who gave the ball away. This allowed Renee to play a defence splitting pass before Ryan Charles took his time before rounding Durin and placing it low into the net.

On 41 minutes A Leigh went into the book for pulling back Callander as Rocks had to regroup at the back, just inside Bognor's half.

A goal was called offside by the linesman on 42 minutes for the hosts. Cureton's neat header from a right sided cross by Mark Haines was well taken but disallowed.

Crane ended a neat passing passage of play before passing into Tuck but he was under pressure when he struck it and his chance sailed over the crossbar.

Following Crane's throw in the ball was blocked out to T Leigh who smashed it first time high over the bar from long distance. Bognor were now playing with the wind in the second half.

Muitt combined with Green before the latter hit one on the turn with his left foot but it took a slight deflection before rolling to Burbridge who saved it down to his right before a Whyte cross was too much for an outstretched Green on the back post.

Bognor won the ball back in their own half with T Leigh. He played in Crane on the right who burst forward. He combined with Muitt and Green before the pass square to Whyte was disappointingly smashed over the bar.

Cureton hit another low shot out just wide of the left post on 53 minutes in response. Stortford previously being blocked off a chance seconds before.

On 54 minutes Whyte threaded the ball neatly to Smith who beat the offside flag. He ran on before firing it low but Burbridge got in the way to push it off for a corner. The ball was played short to T Leigh who hit it early but the curling chance was well saved from outside the area by the shot stopper.

Charles hit a cross in with Worman in pursuit and despite getting to it before Durin the linesman had his flag up for offside.

Muitt had to get back to defend and clear the ball as Bognor lost the ball again in their own half.

On 59 minutes A Leigh was replaced by Tommy Scutt for Bognor as they hoped to somehow get back into this game.

Durin stopped another Charles chance as he cut inside from the right before hitting his left footed effort towards the near post.

Bognor's quick passing on the right won them a corner. Muitt took it on 64 minutes with a driven cross which was headed away.

Whyte passed out to him before he got the cross in again in open play but Wood could only divert it wide of the right post with his chest.

Charles beat Mnoga with the ball before whipping it in for Renee but he headed it wide moments later before Smith's low cross was cut out by Burbridge down the other end.

Bognor had a good chance on 70 minutes when Crane's forward lofted pass to the back post found Smith who headed it but Burbridge batted it away for a corner and clouted the post in the process. He received treatment and did return to play.

T Leigh's low ball into the box was met by Smith and on the turn he went to ground and the referee pointed to the spot. The referee had to control the players reaction after the decision.

Smith placed the ball on the spot after the melee before dispatching it beyond the outstretched Burbridge on 74 minutes.

Cureton was replaced by Harry Morgan on 74 minutes as well. Cureton went over to Robbie Blake on the touchline complaining about the penalty decision when he came off.

Renee ran down the right but it was Alex Warman’s cross which dipped just under the bar but Durin did well to tip it over on 78 minutes.

Green won the ball in the opposing half before passing onto Smith who prodded it forward to Muitt but he drove his attempt wide of the near post with ten minutes remaining.

Whyte's curling cross found Smith who tried to divert it at goal with his first touch but he didn’t get enough on it as Burbridge gathered the ball.

Green won a corner as his cross had to be headed out as the driving rain started to pour.

Worman went into the book for lashing out at Tuck on the touchline before Dan Simmonds replaced Green on 86 minutes.

Warman used his arm to shield the ball following a forward pass and went into the book. T Leigh took the freekick near the touchline with Wood rising in the area but he was penalised for a foul in the air.

Kane Lowe replaced Reee for the hosts as they ran down the clock in the last minute but it was never going to be Bognor's day as Muitt received the ball out wide on the left before cutting inside and sliding it wide of the left post.

Muitt did well to dig out a cross on the turn towards Simmonds and pulled up in pain. Off the ball, Olly Miles rolled on the floor feeling as though he was impeded by Crane on the run but the referee ignored the claims.

The referee had words with both players to calm the situation before a corner was played and the whistle went in the process to end the game.

A forgettable one for Bognor with the penalty goal the only consolation.

They look ahead to a tough season in the Isthmian Premier league as they take on Horsham this Tuesday 13th August, 7.45pm kick off as the games come thick and fast.