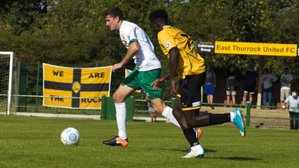 Defensive errors cost Bognor again as they fell into the relegation zone, losing 3-0 away to East Thurrock United at Rookery Hill.

Rocks were without Charlie Searle due to work commitments as Bognor named just three substitutes.

James Crane pulled up during training with a knee problem but despite the worries, he did start the game.

Doug Tuck brought the ball down for Bradley Lethbridge to run onto but he ran out of pitch out on the left.

Alex Clark’s early in-swinging cross was headed out by a stout Ben Clark-Eden. Then Jimmy Muitt ran onto a forward pass down the right saw him drive the ball low into the box and Dan Smith's first time strike was blocked on the line and diverted out.

Frankie Merrifield played it square as Ayodeji Olukoga struck the ball off Harvey Whyte and then Ryan Scott's ball into the box was chipped over the bar defensively by Crane.

Merrifield headed another cross over the bar from the left flank as Petar Durin watched it go over. Then Lethbridge's cross was saved nicely by Jack Giddens.

Clark-Eden pulled the shirt of Morisi Gelashvilli as Rocks were having to defend quickly. Jason Ring's ball in to Billy Crook was headed goalwards but it was called offside on 13 minutes.

Durin had to come out to get the ball at the feet of Olukoga seconds later as East Thurrock looked sharp on the break.

Crane played it short ahead of him before Muitt hit the ball into the box on the rise. Smith was there but it was deflected out to Lethbridge who beat his man but smashed it low and wide of the right post.

Crane headed out a high hanging cross from the right but straight out to Alex Clark who hit it disappointingly wide for the hosts.

Smith stole the ball off Crook before finding Muitt instantly but Muitt’s cross was denied with a clearance. Bognor had the ball in the net on 18 minutes with Crane dispatching Muitt's low cross at the near post, but the ball had gone out of play, according to the linesman and so it didn’t account.

Tuck pounced on the counter attack as Keaton Wood cut out an attack from East Thurrock and his pass found Lethbridge but his cross was fired past the right post.

Good passing play ended when Whyte combined with Tuck before he crossed it straight out of touch and beyond Smith near the back post.

Lethbridge tackled the ball cleanly but the referee gave a freekick. Crook's ball in was headed out and Bognor pounced on the counter but Tuck's ball in was snuffed out after good progression up the field.

Lethbridge played a bouncing ball back and the Whyte was left to deal with it and back to Durin and the striker was left one on one but Durin denied him. The ricochet saw him handle the ball on the rebound on 27 minutes and a freekick awarded in a relieving moment for Bognor.

Tommy Leigh's forward ball was poor and too much for Lethbridge on 29 minutes. But East Thurrock took the lead on 30 minutes and it was a long bouncing ball over the top by Clark before Danny Harris ran onto it before neatly chipping it over Durin and it flew into the net.

Muitt was holding his right ankle following him winning the ball back on the touchline. East Thurrock managed to win a corner in the aftermath.

Scott headed wide a cross by Crook from the following corner, the ball only just bouncing wide of the right post. Muitt did return to play after the injury but didn’t look overly confident when discussing the issue with Holly, the club's physio.

Crane's square pass was cut out and then the run forward by the hosts saw Clark’s cross cut out by Lethbridge.

But on 39 minutes it was defensive errors at the back to blame as Olukoga slotted the ball beyond Durin. Rocks failed to clear their lines along the back and the square passes caught Durin off guard out of goal.

Merrifield was rushing in on goal but Whyte was there to cut him out with a last ditch tackle as Bognor looked very shaky at the back. The half time whistle was a welcome break for Bognor.

Tommy Scutt came on for Bognor at half time and replaced an apparently injured Muitt.

Merrifield ran onto a left sided ball over the top before he was blocked off by Clark-Eden on 47 minutes.

Some positive play for Bognor ended abruptly as T Leigh's ball out wide towards Scutt bounced beyond him frustratingly.

Tuck's ball over the top saw him find Smith who’s cross was feeble and easily gathered on 51 minutes by Jack Giddens.

Merrifield went to ground just outside the box and won a freekick. Crook curled it over the wall and ultimately over the crossbar in a let off for Bognor.

A neat ball over to Whyte by Tuck saw him find Scutt on the run but he was cut out again as Bognor were trying in vein to get a goal back.

Bognor went further behind on 56 minutes. Scott worked the ball well around A Leigh before finding an onrushing Clark who sped inside from the right before smashing it low into the bottom left corner beyond Durin.

A Leigh went into the book on 59 minutes for a body check. Clark’s curling freekick found Scott who headed it off the crossbar.

Clark ran on the overlap as Ring played him in but after cutting inside onto his left foot he could only curl it wide of the left post.

Durin did well to intercept a low cross by Gelashvilli with Merrifield also in pursuit.

Victor Hensel replaced A Leigh on 65 minutes as Rocks needed to get something out of the game but it looked more and more unlikely that this would be the case.

Whyte's deep cross from the right following a throw in was well gathered by Giddens.

T Leigh's chipped pass picked out Smith nestly. But with the goal gaping and the goalkeeper stranded, the striker smashed it wide of the left post disappointingly.

Hensel brought the ball inside before it fell to Tuck and his cross picked out Smith but he didn’t get enough on his header to trouble Giddens on 72 minutes.

Sean Bonnet-Johnson did well to put Bognor under pressure and he did eventually get a shot away but his deflected chance was well saved by Durin.

Bognor were having to deal with the attack and Gelashvilli’s shot on the volley only just bounced wide of the right post from 22 yards out.

Durin was called into action who pushed out Ring's well struck chance after using his pace before cutting inside on 76 minutes.

Hensel won a penalty on 79 minutes. This coming straight after Bognor's goalkeeper Durin had to push out a long goalkick down the other end. If you think it couldn’t get any worse, it did, as Smith's spot kick was scuffed wide of the right post.

Bonnet-Johnson opened up the defence again and with a neat pass in between the Rocks defence. But the linesman had his flag up for offside to halt the advance.

Whyte's lofted corner kick was flicked out by the hand of Giddens as Rocks were desperate to have something positive to come away from Rookery Hill.

But despite Bognor's efforts in the final moments, it really was a day to forget.

Rocks will need to improve to get a result at Nyewood Lane against Cheshunt on Tuesday 17 September, kick off 7.45pm.