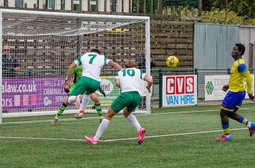 Rocks Lose First Of The Season

Rocks Drop Down To 14th

Bognor lost their first league game of the season as Jordy Mongoy's opening goal was cancelled out by penalty by Roman Michael-Percil and a goal from open play by Laste Dombaxe during an attacking display from the hosts.

Sam Dowridge missed the game through injury at Coles Road. Jake Flannigan got his first start in the league and Ashton Leigh also got a start after he picked up an injury at South Park. Bognor also started Bradley Lethbridge as he returns to full fitness.

Flannigan received the ball from the right from Jordy Mongoy who curled it in for Lethbridge but the defender got there first to head it out.

Keaton Wood did well to chip the ball over defence towards Alfie Stanley but the goalkeeper Jonathan Miles, who initially spilled it, gathered the loose ball.

Laste Dombaxe found the loose ball from the defensive header from Ethan Robb who was back in defence with Joe Cook serving a suspension. Dombae struck it from around 25 yards out but it was always rising over the bar.

Harvey Whyte did well to win a freekick as he passed it through towards Mongoy. Ashton Leigh’s chipped freekick into the area was pulled back for an offside decision with Tommy Leigh and Alfie Stanley straying too far beyond the defensive line on the back post.

Roman Michael-Percil did well to receive the ball from David Olufemi before crossing it to Daniel Akindayini who sliced it high over the bar on 12 minutes.

Rakim Richards did well to run down the right flank but his cross was flung right across the box. Tommy Leigh broke on the attack and combined with Mongoy in a one-two move but Tommy Leigh hit the side netting from a very tight angle on 15 minutes.

Amadou Tangara saved it at his near post as Olufemi made it beyond defence to get a cross in.

Scott Mitchell slid in late and fouled Tommy Leigh and the freekick found Whyte who hit it on the bounce but it was blocked bravely by a defender on 23 minutes.

Stanley tripped the player on the left and Dombaxe's ball in was headed in the air by Robb and Tangara gathered it.

Whyte's cross was flicked out straight to Flannigan who hit it early and off a defender and it failed to trouble Miles as the block slowed the ball to a roll.

Tommy Leigh did well to chip it into the heart of the area for Mongoy who rose highest to nod it low into the net on 27 minutes to give Bognor the lead.

Richards sprung on the attack as he hit one low but it was a crucial block by Robb moments later.

Whyte won the ball in the midfield before playing it out wide to Stanley who cut inside from the right but his shot was easily saved.

Wood was crucial with his sliding tackle as Alfred Bobson Bawling was set through. Dombaxe capitalised on Bognor losing the ball but he fired it wide on 40 minutes.

Scott Durojaiye smashed it from distance but Tangara was equal to it on 42 minutes, pushing it out with both hands as Bognor were kept very busy at the back.

Calvin Davies played it out wide to Ashton Leigh. He chipped it into the area but Mongoy couldn’t capitalise.

Mongoy cut the ball back to Flannigan who spun it in for Stanley unmarked but his first time shot was well saved by Miles who pushed it around the right post. The resulting corner by Tommy Leigh bounced out to Mongoy who hit it early but straight back off a defender before the referee blew his whistle for half time.

Davies did well to bravely win the ball back for Bognor before sliding the ball along the flank to Stanley but his cross flew out of play.

Stanley knocked it down for Whyte but his cross was denied by Miles. Mongoy beat the defence before cutting inside from the left and his strike was punched back out by Miles.

Durojaiye did well to control it before smashing it low off a defender but Tangara saved it on 52 minutes.

Akindayini had the shot low at goal and Tangara somehow scooped it off the line from the striker. But Davies was deemed to have fouled a player in the box in the follow up and the referee pointed straight to the spot. Michael-Percil stepped up to smash it down the middle and high into the net on 56 minutes.

Will Stone replaced Stanley on 60 minutes for Bognor. Tommy Leigh's curling cross found Mongoy who sliced it straight at Miles but he was offside anyway.

Akindayini did well to receive the ball from a loose pass by Wood but his strike flew well over the bar on 63 minutes. Bobson Bawling received the ball in front of the box but his shot was deflected into Tangara's arms.

Flannigan caught Bobson Bawling with his studs up with the ball bouncing up as he tried to control it and he gave him a yellow card on 68 minutes.

Bognor couldn’t get the ball clear as Georgios Aresti ran past two Bognor defenders before whipping it agonisingly across the face of goal on 70 minutes.

Mongoy ran onto the long pass by Davies. He ran on before shooting wide of the near post under pressure from a defender. Tommy Leigh was displeased as he waited in the heart of the box but didn’t receive the pass.

On 74 minutes Bognor gave the ball away from defence as Durojaiye played it square to Dombaxe who beat another Bognor defender before knocking it low and beyond Tangara.

Whyte was clearly the player who fouled Durojaiye on the touchline and was rightly booked. In the aftermath it was Olufemi who reacted, clearly shoving Whyte to the ground off the ball with two hands. Olufemi got away with only a yellow card.

Anthony McDonald beat two players before passing it square to Bobson Bawling who hit it low but Tangara was well placed to save it.
Ben Mendoza replaced Tommy Leigh on 90 minutes in a last change for Bognor.

Mongoy did well to get a low cross in but Rowe wasn’t in a decent position as a defender hacked it away.

Robb slid in late on Aresti and went into the book four minutes into stoppage time. But Bognor struggled to get anything more back as they recorded their first league loss of the season.

The Rocks face Horsham away next in the Pitching In Isthmian League on Tuesday 29 September with kick off at 7.45pm.