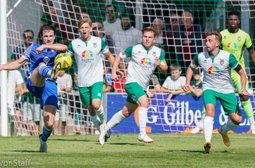 10 Men Rocks get a point

10-man Bognor had to battle to a goalless draw at Nyewood Lane. Captain Craig Robson was sent off after only 25 minutes and was shown a red card. But an otherwise dogged defensive display saw Bognor unlucky not to win this game with the chances they were able to create.

Rocks talismans Harvey Whyte and James Crane were watching the game from the stands as the hosts fielded a full bench. Impressive youngster Nathan Odokonyero got a start after missing the Chichester City last pre season friendly game.

Early on Gavin McCallum played the ball forward to Odokonyero which saw him speed on to shoot with his left foot and forcing the goalkeeper into a parried save, pushing the ball around the post.

The corner by Ashton Leigh saw him pass short to Calvin Davies but he strayed offside.

Rio Davidson-Phipps went to ground with a knee injury off the ball. Stoppage in play ensued lasting around 2 minutes but he did return to play.

Craig Robson combined with Jordy Mongoy on the left as a loose ball fell to the captain. But Robson struck wide with his right foot on 12 minutes.

Amadou Tangara was called into action as he spilled a cross thanks to a player kicking it out of his hands.

Sam Robbins replaced the injured Davidson-Phipps on 20 minutes for the visitors.

Leigh won a cheap freekick near the corner flag on the left side but his curling cross was headed away and the referee gave a freekick to the visitors.

Robson swung his right leg at an attacker appearing to try and clear the ball and the forward player went to ground just outside the area. The referee brandished his red card without hesitation on 25 minutes to send Robson back to the stands. It was argued that Robson didn't leave the ground in the challenge and was just trying to clear the ball.

Due to this Bognor had to sacrifice McCallum and bring on Joe Dandy on 27 minutes to fill tye gap in defence.

Frustration was high as Davies committed a foul, sliding in late to defend a forward ball but with Bognor down to ten men, they had to be careful for the remainder of the game. Fortunately no cards were shown for the incident.

Robbins played a lofted ball in which was knocked down in the area but Tangara gathered it. Tangara stopped a low Jake Cass strike from outside the box.

Ethan Robb slid in and caught Archie Edwards and the referee gave a freekick. But the ball in was hacked clear by Jake Flannigan.

The resulting corner fell to Dandy who went to ground under pressure in the box and then Odokonyero followed up with an attempt hit low, but it was comfortably saved by Giddens.

It was studs up as Frankie Merrifield clashed with Joe Cook who went to ground and had to receive treatment. A yellow card was shown to Merrifield for the dangerous challenge.

Flannigan had to head out a freekick curled in by Stortford in a crowded area. The corner by Jonathan Giles fell to Cass who was bravely blocked by Flannigan and Cook with two shots.

Mongoy sprang on the counter. He rounded two or three players before shooting wide as Odokonyero was not quite up with him in the area.

Ryan Giles had another chance deflected towards Tangara who caught it thanks to the Rocks defence getting bodies in the way.

Davies swung in a freekick from wide on the left but it was caught by Giddens.

Charlie Bell chipped a freekick into Mongoy but he was under pressure and slipped up before Odokonyero blasted it off a defender.

Tangara got down to his left to deny Jonathan Giles with only one defender back as Stortford responded.

Merrifield combined with R Giles but his ball across the area with his left foot flew agonisingly out of play with no one on the back post to follow it up.

A slip up at the back allowed Cass in and his shot was denied by a solid save from Tangara who was keeping Bogjor in the game.

Phil Brown replaced Bell on 62 minutes for Bognor to freshen up midfield.

A looping ball into the area by Jack Thomas who found Merrifield headed it into the net with Tangara punching and missing it. The linesman had his flag up for offside though so celebrations were cut short on 66 minutes.

Leigh came off for Ben Mendoza on 67 minutes for Bognor.

Another cross was gathered by Tangara as it bounced to him from the right as pressure was building on both ends of the field.

Davies' curling freekick was headed high up in the air and Giddens saved it.

Mendoza sprang Rocks on the counter attack. He split defence with a pass forward to Mongoy who ran on and inside before smashing it high and wide of the near post on 80 minutes in a great chance for the Rocks.

J Giles hit another attempt well over the crossbar in response as Stortford were very wasteful up front.

Flannigan and Mendoza had good crosses knocked out on both occasions and the corner by Flannigan was also headed out by a defender.

Mongoy won a corner with a bursting run. But again the hosts were denied after the short corner came to naught.

Odokonyero lost possession almost letting in Cass but it was Cook back to defend to head it back to Tangara in a game where both defences reigned supreme.

Rocks travel to East Thurrock next on Saturday 21 August, with kick off at 3pm. Bognor are hoping to build on this point as the season continues.