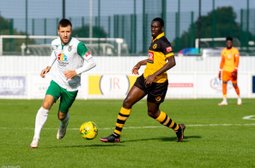 Another great win on the road

Rocks continued their winning ways with a narrow result at Cheshunt as a mess up by the referee, sending off Jordy Mongoy right at the end, failed to dampen the side's form.

Ashton Leigh's fine left footed strike on 42 minutes was enough to give Bognor all the points on a warm afternoon in Hertfordshire.

Rocks were unchanged as they lined up against Cheshunt with Joe Cook and Harvey Whyte remaining on the bench as they return to fitness from injury.

James Crane slid in late on Mo Camara as he surged forward before getting tripped up. Zack Newton stepped up but curled his strike over the crossbar.

A long throw by Enock Ekongo was gathered by Amadou Tangara as Bognor had to contend with early Cheshunt pressure.

Craig Robson had to clear the ball as Newton fired the ball into the box. A cross found Adam Crowther on the back post who headed it wide.

Ken Charles did well to get to the byline. He cut the ball back to Joe Re who hit it along the deck and wide of the left post.

Tyler Myles clashed with Rocks players in the heart of the pitch and after receiving treatment he returned to play.

Amadou Kassarate flew in with a wild tackle on Calvin Davies and he also needed treatment. Robbie Blake and the opposing dug out hard heated words as they disagreed about the challenge.

Tangara had to pull out a sliding challenge of his own before punching and then gathering a corner ball.

Nathan Odokonyero was the provider with a cross from the right but the ball was headed back to the goalkeeper. Then Kayne Diedrick-Roberts strayed offside in an otherwise quiet half for Bognor.

Davies combined with Odokonyero who ran forward some way before shooting with his right foot only narrowly wide on 36 minutes in Bognor's best chance to his point.

Ashton Leigh went into the book after a late challenge. After players reacted in a crowd around the referee. The official also gave a yellow to Ekongo after the reactions. The resulting freekick flashed through the box and out of play with Tangara seeing it off.

Bognor were passing the ball around in Cheshunt's half. It was squared to Leigh who hit it early with his left foot. It sailed high into the top left corner on 42 minutes to give Bognor a surprising lead, to end the half.

Kassarate went in the book for an early challenge in the air as Calvin Davies came out of it with a head injury.

Jordy Mongoy did well to win a freekick on the left. Leigh's curling freekick found Odokonyero who rose highest but his header lacked venom and was cleared off the line.

Flannigan passed it back to Tangara. Tangara tried to passed it out straight to an onrushing Newton who stole it but his instant strike was gathered by Tangara as he saved himself an embarrassing moment.

A cross by Newton was pushed back out by the defence before Camara wasted a chance down the left smashing his attempt at a cross out for a goal kick.

Leigh combined with Flannigan on the right. He tried to drag the ball into the area before it rolled out of play. Odokonyero couldn't quite get to it to the near post.

Newton got a yellow card for a trip on Davies in Bognor's half as Cheshunt were trying to get back into the game.

Mongoy received the ball on the left before crossing it into the area. But Odokonyero was not quite up there to capitalise.

Davies was fouled again. A freekick was awarded but Leigh's curling ball towards the back post was well gathered by George Marsh.

Aaron Blair did well to turn and shoot from the throw in. But it came off a defender and out for a corner. Tangara palmed the first over the crossbar. The goalkeeper pushed out the second from the following corner, keeping Bognor in the game.

Crane did well to win a corner on the left. Leigh's corner was floated in onto the boot of Craig Robson who slid in but it was a great save by Marsh with his left foot to deny him.

Ekongo cut inside before crossing the ball in for Charles who directed his header at goal. Tangara dived to his right to push that around the post and out.

Kassarate and Newton were replaced by Theo Osinfolarin and Zubayr Boadi for the hosts.

Charlie Bell came on for the limping Leigh who put in a good shift as well as clinching a super goal earlier on.

Ethan Robb tried to clear the ball out but it ricocheted off a Cheshunt striker and inadvertantly over the bar.

Mongoy was booked for coming off the pitch slowly due to be replaced by Joe Cook on 81 minutes. The referee totally lost control. He thought he had already given Mongoy a yellow card earlier in the game when it was Leigh who was booked earlier. After giving the yellow card to Mongoy, the referee turned to the pitch before coming back again and showing a red card to Mongoy whilst he was on the bench. Rocks were down to ten men as Cook was unable to replace him. In the arguments after this decision Tangara and Brook were both booked.

Ola Williams hit one after all the drama. It flashed wide of the left post from a 45 degree angle outside the box.

Bognor held onto the win here after a messy end to the half.

The referee had owned up to the mistake after the final whistle and apologised. The Mongoy sending off will therefore due to be rescinded.

Bognor now have a break before travelling to Bowers & Pitsea on Saturday 23 October, with kick off at 3pm.