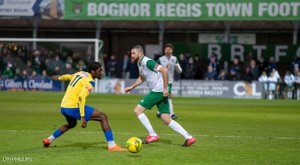 Rocks fight back from 2-0 down

Bognor came from behind again to get a 2-2 draw and a point at Nyewood Lane. Late drama saw Muhammudu Faal's two goals were cancelled out by Nathan Odokonyero and then Jordy Mongoy's 87th minute goal gave a share of the points to both sides.

Charlie Bell replacing Ashton Leigh was the main change of the day as Rocks lined up against in-form Enfield Town. Joe Cook was still missing through injury for Bognor.

Calvin Davies tried to find the onrushing Nathan Odokonyero who ran through after a pass with the outside of the boot but the ball rolled out for a goal kick.

Enfield responded when Andre Coker sped down the right before curling a cross in and Adam Cunnington was unmarked as he spun his header over the bar.

Bell played a short corner to Harvey Whyte and it was played back to Bell who passed the ball inside and Odokonyero’s turn and shot was blocked bravely. Then Bell’s driven and low corner was miscued by James Crane on the volley and the danger was cleared.

Davies gave away a freekick. Coker curled it right onto the boot of Faal who diverted it neatly on the volley into the top right corner after just 9 minutes.

Bell found Jordy Mongoy on the right with a pass. He ran on before diverting a cross in low looking for Odokonyero but it was cleared.

Ethan Robb miscued his pass from the back allowing a simple through ball by Cunnington into Faal who ran on before coolly stroking it beyond Amadou Tangara on 13 minutes to extend Enfield’s lead.

Sam Youngs’s strike was deflected wide and then Chappell followed it up by blasting over with his left foot in another great chance for the visitors. A second Chappell long throw from the left bounced once in the box before bizarrely flying over the bar.

A short corner was played out to Mongoy who squared it into the area and Kayne Diedrick-Roberts was there but didn’t get enough on his shot to trouble Nathan McDonald in the Enfield goal.

Emmanuel Maja-Awesu went into the book for catching a Bognor player late on 26 minutes.

Coker went down to ground off the ball at one end but after a word from the referee he got to his feet.

Another Bell corner was powered out of the box by the head of Cunnington. Before Mongoy picked out Odokonyero inside the box but with only McDonald to beat, but it was he who stood up to save it.

Bognor were stirring though and Jake Flannigan's long range effort was pushed out by McDonald straight to Odokonyero who poked it home on 37 minutes on the rebound after some good pressure.

Bognor should have scored on 42 minutes. Flannigan was blocked then Odokonyero’s turn and attempt was shut down as Bognor were after an equaliser.

Bognor gave the ball away at the back. Coker was set through and his low strike was palmed out by Tangara and then Crane cleared the loose ball.

Good build up saw Craig Robson play the ball out wide to the left but Crane’s high cross bounced out of play.

The half time whistle came at the wrong time for Bognor as they were just coming into the game before the break.

Enfield Town replaced Harold Joseph and on came Ryan Kirwan at half time.

Diedrick-Roberts was blocked with his shot as Bognor started as they left the first half. Then Crane's headed knock on into the area and an overhead kick by Odokonyero was deflected wide.

Diedrick-Roberts played the ball back to Odokonyero who hit one from outside the box but again was blocked.

Tangara had to head out a fiercely struck forward ball for a corner. Tangara gathered Coker’s corner before bowling the ball out to Mongoy on the right. He ran on but his high cross was too much for Bell.

Youngs was booked before Harrison Brook replaced Diedrick-Roberts on 57 minutes for Bognor. Brook was involved immediately as he placed it into the area but Odokonyero was blocked again with pinball action in the box.

Faal required treatment as he went onto the deck off the ball. He did return to play.

Davies found Mongoy on the right. He crossed it for Brook to pounce but he shot it low and wide of the left post. Then in the follow up Manny Maja kicked the ball out of play in frustration and was shown his second yellow card and was therefore sent off.

Soon after it was Percy Kiangebeni who caught the Bognor player on the touchline. He also went into the book.
Bell came off for Leigh on 66 minutes as the rain was now pouring down at Nyewood Lane.

Leigh whipped in a cross and it was Whyte on the back post but he diverted it wide of the goal after great work from Brook on the left.

The conditions were worsening as Mongoy’s pass flew out of play on the left. Brook found Odokonyero with an inside pass. He spun his man and struck it low but it was the right leg of McDonald denied him as the goalkeeper diverted it wide.

Robb went into the book on 77 minutes as he tripped up Faal on the turn just inside Bognor’s half.

Bognor got an equaliser on 87 minutes in dramatic fashion. Dandy’s cross was put onto the back post and it was Mongoy who headed it in at the back post to send Bognor fans into a celebration.

Cunnington went into the book for dissent as frustrations flared after Enfield conceded the lead.

Davies spun a cross in that had to be punched away and then Mongoy’s run inside ended with him shooting high over the bar. Dandy's low cross was deflected the ball agonisingly wide of the near post by a defender.

Tangara let Bognor off with a fine save right at the end. Faal was set through one on one and the striker was stopped by the brave goalkeeper down to his right near the edge of the box.

This was the last chance of the game to end a very exciting fixture featuring two great teams.

Bognor head to Bexhill United in the Sussex Senior Cup on Wednesday 15 December, 7.30pm kick off.