Rocks were back to winning ways at home as two second half goals from Jordy Mongoy and Dan Gifford saw the side maintain 12th in the table.

Jake Flannigan returned to the Bognor side after coming back after injury. Kayne Diedrick-Roberts gave way for him to start on a full bench for the Rocks.

Potters Bar's Bilal Sayoud had a chance after just 22 seconds. Joe Dandy headed it out straight to him and he spotted Amadou Tangara off his line but the ball flew narrowly over the crossbar from the strike.

In response, Flannigan played a bouncing cross in from the right towards Nathan Odokonyero who was only just beaten to the ball by the defender.

Ashton Leigh's corner was headed out and then Odokonyero had strayed offside with a lofted pass over defence.

Leigh was pulled back on the shirt by Luke Joyce-Dwarika after just 5 minutes on the half-way line. He therefore went into the book.

Flannigan's long ball down the line saw Jordy Mongoy win a throw in. It was taken quickly. Odokonyero held the ball up for Leigh who let fly with an edge of the box effort, forcing Ciaran Gordon-Stearn into a decent save, pushing the ball high up in the air and cleared by his defence.

Joyce-Dwarika did well to get the Bar on the break. He found a pass inside to Amine Sassi who hit it low and Tangara was therefore called into action, getting down low to his left to push it out again.

Flannigan's pinpoint cross picked out the young and rising Dan Gifford who powered a header into the net on 11 minutes. But unfortunately he was offside so the goal didn't count.

Harvey Hughes's cross was headed out to Calvin Davies who hit his low shot into the arms of Gordon-Stearn.

Odokonyero pounced on the left flank before cutting inside and shooting low, forcing another save from the goalkeeper. Gifford won a corner for a deflected chance soon after as it was all Bognor in the early going.

Sassi won a freekick but when Sayoud dipped it in, Craig Robson hacked it clear.

Mongoy won a corner on the right. Leigh curled the ball right onto the head of Gifford who directed it well wide of the goal after rising highest in the box.

The match was being played at a high pace with both sides enjoying attacking moves. Davies stole the ball from the Potters Bar defence and chipped it to Odokonyero but he was shut down, allowing the Scholars an attack. Rocks defenders did well to keep out Sassi though, as Tangara gathered the ball high in the air following his strike.

Mongoy was set through but he was fouled. Though the Bar player was lucky to get away without going into the book.

Joe Cook fouled Joyce-Dwarika but the freekick was poor and easily headed away by Bognor.

Dwight Pascal was the savior for Potters Bar on the back post as Mongoy's low cross was kicked away by the defender with his first touch as it swung towards goal.

Hughes played it forward to Leigh who ran through before shooting with power. It came off Luke Tingey and ricocheted at goal but it was a good save by Gordon-Stearn. It fell out to Odokonyero who was denied with his turn and shot.

On 30 minutes it was Davies who curled it in from the corner but it was only just headed away.

Leigh hit the eighth corner in from the left and yet again it was headed away by the defence. Soon after a ball into the box fell to Gifford who was twisting and turning but couldn't get a shot away.

Pascal responded with a run down the left. He played the ball across the face of goal and it was out of the reach of Sassi on the back post.

Then Tangara had to catch it from another cross from the left as he was confident in commanding his area throughout.

Kieron Cathline went into the book on 45 minutes for fouling Gifford. Jaden Sharman kicked away Davies' cross into the box as the half ended goalless.

Sharman went to ground in the box following a clearance and required treatment. This meant posy was paused early in the second half.

Odokonyero picked out Gifford ahead of him but he was flagged offside as Bognor needed to get a goal.

Sassi stole possession before passing to Samson Esan. He steadied himself before curling a strike high and wide on 49 minutes.

Sassi clearly fouled Cook in Bognor's half and rightly went into the book on 52 minutes.

Flannigan won possession back and passed back to Davies who hit a cross in but it was headed out by Cathline.

Sayoud pounced on the counter. He ran inside from the right after a run before knocking an attempt wide of the left post with his left boot.

Cook struck it well over the bar in response as frustrations started to grow in the Bognor side with chances going astray.

But Bognor's hard work paid off as Flannigan beat Sharman on the right before crossing the ball in. Odokonyero left it for Mongoy who was waiting unmarked before he smashed it high into the net on 59 minutes.

Mongoy was causing more problems and he passed it back to Hughes who hit it. However, he was blocked, and then Leigh was also bravely stopped by the defence.

Then Cook headed over off the top of the crossbar directly from Davies' corner kick on 62 minutes.

Pascal was unmarked with a free header direct from Joyce-Dwarika's corner but luckily for Bognor the chance flew wide of the right post.

Heads clashed in the penalty area as Cook was crowded out in the box as he bravely headed it away from a cross. Cook received treatment from the physio but he did eventually return to play.

Flannigan flashed in another cross and won a corner. And after two corners and nothing coming from either it was Flannigan who was replaced by Robb on 76 minutes.

Eddie Carrington-Alberdi made a good run inside from the halfway line. He found Sayoud with a forward ball but he skied his chance.

Carrington-Alberdi had a shot of his own which was only just wide of the left post.

But Bognor got their second goal of the game on 80 minutes. A neat headed flick on by Leigh allowed Odokonyero to speed down the right. He got a low cross in and the ball fell to Gifford who composed himself before slotting the ball low inside the left post on 80 minutes.

Odokonyero found Diedrick-Roberts on the run through defence. He ran on before getting a shot away but he was blocked by a defender and Gordon-Stearn's advance out of goal scuppered his chance to make it three.

Then Carrington-Alberdi received a pass directed behind him, before turning and blasting it high over the bar from over 20 yards out.

Bognor were ahead throughout the 3 minutes of stoppage time and were confident winners at Nyewood Lane for the first time in league action since 5-October against Leatherhead where Bognor triumphed 3-2.

Thanks to our match sponsors Artistic Stone Ltd
Who chose Dan Giffordas as The Specsavers Man Of The Match.
Well done, Dan! 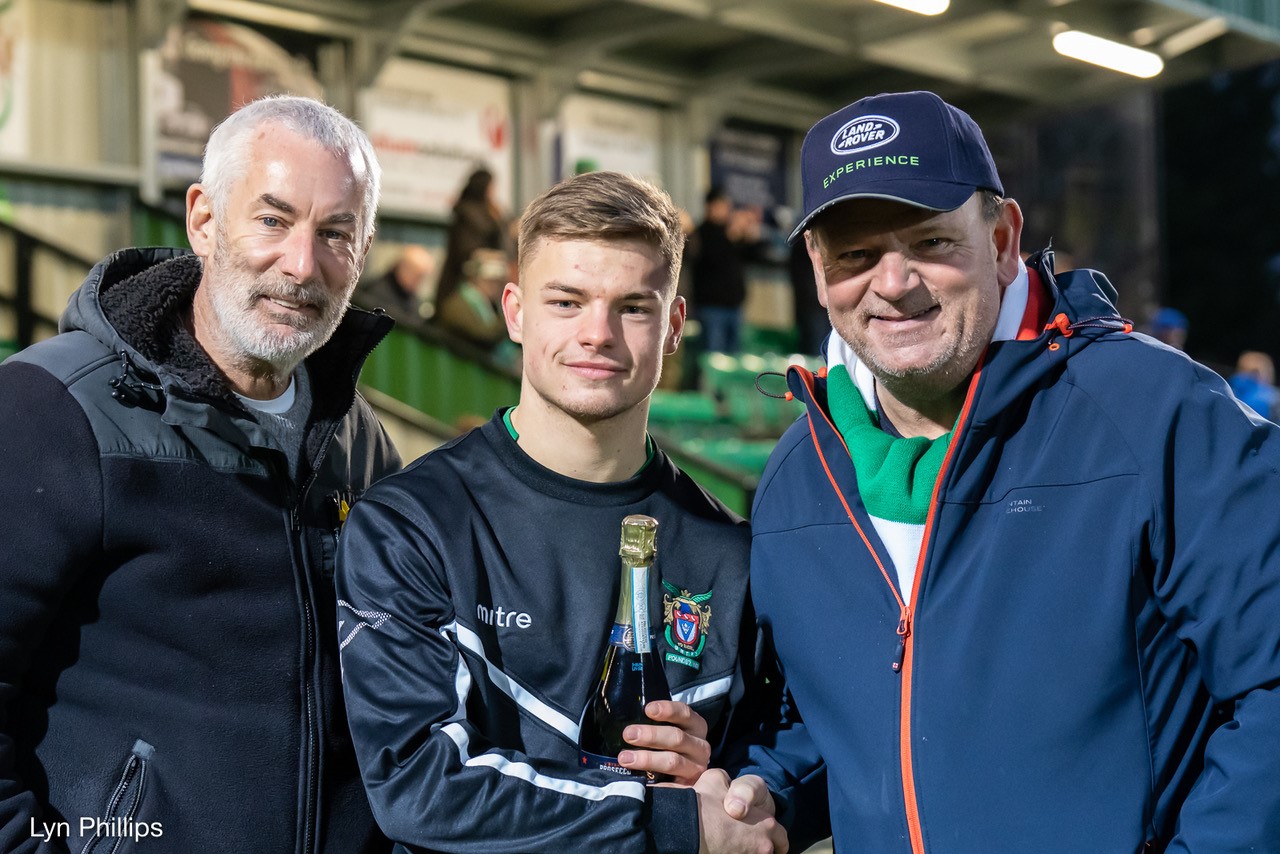