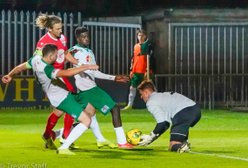 2nd in the league

Bognor moved up to second in the Isthmian Premier League after coming from behind again, but this time going onto win at a chilly Nyewood Lane under the lights. Goals from James Crane, Nathan Odokoynero and Jordy Mongoy settled it for the Rocks in an entertaining game against Leatherhead, writes LIAM GOODLEY.

Harvey Whyte was missing although he watched from the sidelines due to an ankle issue and didn't want to risk playing on it. This meant that Calvin Davies got a place in the starting eleven.

Early on Alexander Sami stole possession and made his way through into the area but his square ball along the deck was cut out by Ethan Robb.

Ashton Leigh neatly turned his marker on the half way line. He sped on before threading in Kayne Diedrick-Roberts but that move was also cut short for an offside call.

Jake Flannigan poked the ball forward to Mongoy who hit a deflected low cross into the box. This fell out to Odokonyero who turned swiftly before smashing it at goal but this was blocked by a defender. The defence failed to clear their lines but Flannigan’s eventual shot flew low and wide of the left post.

Jedd Smith did well to cut the ball back to the quick Sami who dodged his marker before shooting. It took a deflection before hitting the near side netting and out for a goal kick.

Davies headed out a freekick from the left side. Andrew Briggs' corner was headed out back to him but his second cross flew across the area unheeded.

Joe Dandy surged out of defence with a run. He picked out Davies on the overlap on the right but then Davies' low cross was easily deflected out.

Crossley Lema's forward high-hanging freekick was knocked on in the air by Ryan Huckle but his header didn't trouble Amadou Tangara.

Diedrick-Roberts was unlucky after his turn in front of the box. He swung his right boot at it but it was deflected wide. On 20 minutes the corner from Leigh wss floated into the heart of the box but Craig Robson, unmarked, was just out of reach with his header in the area.

Leigh did well to hold the ball before finding Odokonyero who beat his man and hit a lot attempt at goal, forcing Myles Bowman into a good save.

Bognor dissapointinyly went behind on 26 minutes. Robson lost possession with the Tanners playing a high line. Jedd Smith won it off him before placing it through to an unmarked Jack Skinner who slotted it low beyond a diving Tangara.

James Crane's turn in the box saw him run into a crowded area with Odokonyero up with him but Bowman was quick out of his goal to gather it.

Robson gave the ball away and Sami got a shot away just inside the box, but Tangara was out of his goal to deny his strike.

Sami was injured during the incident and had to be replaced by Callum Manning on 33 minutes.

Leatherhead won a corner from a high looping throw in. Briggs did well to chip the corner into the box. It fell to Smith who hit it well and high but Tangara acrobatically tipped it over. Smith hit another similar chance over the bar seconds later.

Davies did well to get the Rocks forward. Diedrick-Roberts made a direct run into the area and won a corner. Leigh’s corner was cleared though.

Crossley Lema denied Mongoy a goal with a brave block on 39 minutes as the ball was played along the deck. Then another Leigh corner was played in low. It fell to Odokonyero who turned and passed the ball back to Diedrick-Roberts but he smashed it well over the crossbar from the edge of the box.

Mongoy was twisting and turning before finally digging out a cross and it flashed across the fade of goal with no one on the back post.

Tangara bowled the ball straight out to Smith, who spotted the goalkeeper off his line and he fizzed one at goal but this effort crashed off the crossbar on 43 minutes.

Mongoy threaded another ball into the box for Odokonyero who turned to shoot instantly but he was blocked. The defender deadened the speed of the ball as Bowman gathered it ahead of an onrushing Crane.

Davies was clearly fouled on the turn and received a freekick. Robson played a ball forward in between the defence but it was too much for Crane on the run.

Dandy played an early diagonal ball across the field to Mongoy but he couldn't control it as it flew out for a goal kick.

Davies was clearly fouled by Huckle and he went straight into the book on 48 minutes deep inside Bognor's half.

Crane found Leigh with a pass. He won a corner. Leigh’s ball in was headed away though.

Leigh slipped another neat ball forward but Bowman was quivk enough to dash out of his goal to deny Crane with his bursting run inside the penalty area.

Bognor were being wasteful still as Leigh's pass forward rolled out of touch with Flannigan in hot pursuit.

However, Bognor did get their equaliser on 58 minutes. The ball was played along the deck square from Odokonyero to Crane who took his time before slotting it low beyond the outstretched Bowman down low and inside the bottom left corner of the net from outside the box.

Leigh cut the ball back and found Mongoy who cut inside and his bouncing shot forced a decent parried save from Bowman as Bognor were building in confidence.

Mongoy played a neat ball through back to Robson unmarked just inside the box. Though he skied his effort with his first touch.

It looked certain that Bognor would eventually take the lead and they did so on 63 minutes. Bognor stole possession deep inside the Tanners half. It was Odokonyero that turned, composed himself and smashed it at goal. The ball nestled into the bottom right corner of the net sending Bognor fans into a celebration.

Mongoy squared up soon after from 30 yards out. He diverted his effort wide of the left post with Bowman diving.

Mongoy was set through with Leigh pass inside. He ran on before shooting from a tight angle. The goalkeeper got something onto it before it was cleared off the line by a defender’s header.

A ball across the edge of the box by Harrison Brook found Leigh who was alone when he hit it low and hard but agonisingly wide of the left post.

Mongoy got Bognor's third goal of the evening on 75 minutes. He beat two men before running across the defence before shooting low and hard. He managed to beat a diving Bowman to slot into the bottom left corner of the net.

Briggs curled a freekick straight to Tangara directly from the left as Leatherhead were knocked back by that third goal.

Though Bognor let a goal slip again on 84 minutes. A poor pass out by Joe Hancott fell to Adam Green who spotted Tangara off his line to fire it low into the unguarded net.

Again Rocks lost possession in front of defence but Briggs' curling shot forced Tangara into a diving save, pushing the ball off the post with his left glove. Manning was offside on the rebound.

Skinner hit the crossbar again with minutes left. Tangara followed up this with a save from Manning as it was headed back at goal.

Davies was booked for an earlier foul on 89 minutes before Leatherhead hit the crossbar. This coming after Diedrick-Roberts had smashed it agonisingly wide of the left post down the other end.

Ethan Robb did well to hold possession on the right before whipping in a cross. He found Mongoy who beat his man before firing it high and wide.

Craig McGee went into the book as he pulled back Mongoy on the turn right at the death but Bognor battled onto the final whistle to take the points.

Rocks take on Cheshunt away next on Saturday 9 October with kick off at 3pm.