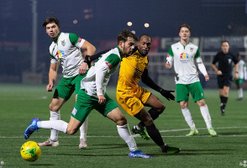 A hard working performance from Bognor saw them narrowly beat Cray Wanderers away from home when young Dan Gifford found the net, his first goal for the club, the difference between the two sides.

Bognor returned to action after the past two games at home to Merstham and then away to Carshalton Athletic were both postponed due to COVID cases in the playing side.

Rocks returned to action at a very cold Bromley to take on Cray Wanderers with a squad including Harvey Whyte back in the starting line up following his injury problems. Charlie Bell was on the sidelines serving a suspension and made a cameo appearance on Rocks Radio.

Jordy Mongoy won an early corner after good work from James Crane and Whyte. The corner was played short to Harvey Hughes who directed an effort at goal but it was well stopped by Bailey Vose.

Hughes cut the ball out on the halfway line before hooking the ball forward towards Dan Gifford but a defensive header nodded this chance back to the goalkeeper.

Jamie Yila committed Amadou Tangara into a low save down the other end. This came after good work down the left from the hosts.

Bognor pounced on the attack as Mongoy threaded in Hughes but his cross was cut out. Mongoy was twisting and turning moments later but when he got his shot away he was blocked by a defender.

Joe Cook surged forward and after making it into the box he back-heeled it back inside to Gifford but he sliced his effort well wide.

Craig Robson and Hughes combined to set Mongoy up but after running inside the box he was again blocked by the defender.

Robson played a neat ball into Nathan Odokonyero who ran across the defence before curling it at goal. A defender got there first to divert it over the bar with his head. Hughes' corner was driven low and easily cleared at the near post.

Tangara made a fantastic save on 19 minutes but it was called back for offside anyway.

Cray were playing out from the back. Gifford caught them out as they lost possession cheaply. He passed it inside to Odokenyero who was outstretched when he slid an effort wide of the right post on 22 minutes.

Luca Albon received the ball from Yila as he beat Crane on the left flank. Albon sliced his effort wide of the right post when it needed to be on target for Cray.

Gifford's low pass inside was searching for Ethan Robb but he was denied and then Whyte was blocked on the follow up.

A freekick saw Kyel Reid swing the ball in and it was Chris Dickson who headed it into the net. However, it was clear he was in an offside position and so the goal didn't count.

Yila pounced on the counter. He cut the ball back after a long run to find Albon. He hit it early but the ball bounced wide.

Freddy Barton sped down the right before whipping in a low cross but Tangara got down bravely to intercept it.

A one-two with Robson saw Mongoy square up to it before shooting from distance. But Vose denied him comfortably.

Whyte poked the ball through towards Odokonyero but again, outstretched, he could only divert it harmlessly to Vose along the deck.

Bognor ended the half with a decent chance. Gifford won a freekick near the right sided corner flag. Whyte played it along the deck to Odokonyero, who peeled off his marker, though having to hit it on the turn he could only hit it high over the crossbar.

A long ball forward by Crane was knocked on by the head of Odokonyero but the ball was gathered by Vose.

Reid played the ball square to Daniel Uchechi who was denied with his chance that bobbled harmlessly and blocked by the Bognor defence.

Whyte found Gifford who spun his marker but after turning he poked his shot along the ground and wide of the post.

Robb gave the ball away on the halfway line. Allowing Reid a run on the right who played it inside on the deck. Joe Dandy got there first but played a first touch back pass which caught Tangara out and he could only just clear it away.

Uchechi was already making an impact for Cray as he set up Anthony Cook but he belted it high over the bar.

Crane passed it backwards allowing Dickson in who ran on before trying to chip Tangara but he was equal to snuff that chance out.

Cook went into the book for his foul on Aidoo Kasim. Albon whipped it in but Crane redeemed himself by heading it out again. This came before Dickson wasted yet another chance for the hosts as he belted it over. The linesman had his flag up for offside as well.

Robb was caught out again. Reid pounced on the right to get a cross in. Tangara seemed to catch it but he ended up dropping it and Dickson was blocked on the rebound.

But Bognor went into the lead on 60 minutes. A goal kick from Tangara fell to Robb who played the ball neatly into Gifford who turned around quickly into space. He then ran on before neatly sliding the ball under Vose and into the net.

Whyte and Mongoy then intercepted the ball. Whyte found Gifford who was on form before turning and shooting wide. He won a freekick though as he was caught late just before shooting. Crane stepped up to take the freekick which was just inside the D. He curled it narrowly over the bar.

Dickson stole the ball straight from a Bognor throw in. The ball was played square to Albon who turned and hit a chance low, which took a slight deflection off a Bognor defender and narrowly wide of the left post.

Dandy lost possession on the right flank. This allowed a square pass to be played to Albon who composed himself before firing it well at goal. This forced Tangara into a fine diving save where he used his fingertips to steer the ball over the goal.

Mongoy went to ground from a knock and received treatment. This coming after some Bognor pressure. Tangara was called into action also, having to punch two crosses back out of the box before this.

Odokonyero was replaced by Kayne Diedrick-Roberts on 84 minutes in Bognor's first and only change of the game.

Mongoy was fouled off the ball but the referee failed to see it. After talking to his assistant referee, he had words with both Mongoy and the Cray player in question but no bookings were given out.

But Bognor held onto the three points in hopes of returning to the top half of the table with a hard-fought win away. They take on Horsham next back at Nyewood Lane on Saturday 15th January, with kick off at 3pm.