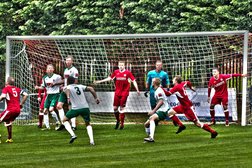 Rocks are through to the quarter finals of the Sussex Senior Cup after a fine 5-0 victory at Bexhill United.

Charlie Bell, Nathan Odokoynero (2), Kayne Diedrick-Roberts and Jake Flannigan were all on the scoresheet as the current holders sailed into the next round draw.

Therefore, Harrison Brook, Joe Dandy and Kayne Diedrick-Roberts all got starts for Bognor with only two players on the bench, including a young Flynn Barnes from the Rocks youth system.

Early on Jake Flannigan conceded a corner on the left after Nathan Lopez's run. The corner was played to the near post but cleared on both opportunities.

Bognor had a slow start as they were trying to get used to the pitch. Ethan Robb played it out wide towards James Crane but it ran out of play. Then Flannigan's forward chipped ball was headed on by Nathan Odokonyero but there was no one up to support him.

A lobbed ball into the box was looking to beat Tangara but he gathered it, though it was offside anyway.

Then Charlie Bell's corner picked out Craig Robson who hit it early but it was blocked. Soon after a Bexhill attack Bognor pounced on the break and it was Diedrick-Roberts who let fly from the edge of the box but it was well saved by Dan Rose who managed to push it out again.

Davies got the ball in Bognor's half. He played it on and eventually it was Bell who found Diedrick-Roberts who playe the ball back into the area where Brook was waiting and his shot was good but pushed away at the near post by the goalkeeper on 12 minutes.

Bognor had to be careful at the back though as Max Walsh was allowed space but from over 25 yards out, he hit his left footed shot well wide of the right post.

Walsh provided a pass out wide to Jack Shonk who whipped it into the area and found Evan Archibald but his strike at the back post was disappointing and fired it high over the bar with his left boot on the rise.

Bognor took the lead on 19 minutes. Crane's left sided throwing was bounced to Diedrick-Roberts and he found Brook on the right. Brook hit a deflected cross inside which fell kindly to Bell in the box who slotted it low into the net.

Walsh found Shonk on the break on the right again but his cross was only just knocked out for a corner at the near post. Bognor dealt with a second poor corner in a row and managed to clear the ball.

Lopez was booked on 24 minutes for a poor challenge on Brook down the other end. Davies curled the freekick in but it was poor and easily cleared.

A failed clearance from United in their own penalty area saw Crane pounce on the volley to shoot but the goalkeeper pushed it out again. The pressure was still on though and Bell's long range effort was only just deflected high over the crossbar. The resulting corner by Bell fell to Crane who was unmarked when he headed it wide of the right post.

Tangara caught Bradley Pritchard's long freekick into the area. He turned defence into attack with a super throw. Davies ran onto it before passing on to Diedrick-Roberts who cut the ball back into the penalty area but it was cleared by the Bexhill defence.

Then Flannigan hit a cross in high but it was caught by Rose at his near post.

Off the ball Dandy and Archibald had heated talks as they clashed. Both went into the referee's book on 33 minutes for the bust up.

Bell's low corner soon after found an outstretched Robson but he skied his first time attempt well over the bar.

Diedrick-Roberts passed onto Odokonyero who turned well before shooting from outside the box. It was hit low though and it was Rose who saved it to his right.

Davies went to ground under a challenge and won a freekick 35 yards out nearer the right touchline. Bell curled it in and found Crane who powered it just wide of the right post on 40 minutes.

Bell played the ball in nicely to Crane who won a corner on the left side. Bell took the corner and it flashed across the face of goal but out of the reach of Crane who was rushing in and ultimately out of play.

Crane was playing well. He found Brook with a diagonal ball but after he cut inside his left-footed effort flew high and wide of the goal.

Crane's chipped pass bounced to Bell who diverted it back inside but Odokonyero missed it and tge ball rolled across the Bexhill box as Bognor started the second half well.

Brook lost possession and gave away a freekick in Bognor's half. The freekick bounced awkwardly near Shonk but Tangara gathered it and the linesman had his flag up for offside.

Flannigan knocked the ball out of play so that Charlie Curran could receive treatment. Lewis McGuigan replaced him on 52 minutes as Curran couldn't continue.

Kyle Holden won the ball back from the middle of the pitch to find Shonk on the right. He bounced in a low cross of which Archibald couldn't reach sliding in at the back post. A crucial chance missed for the hosts.

Joe Summerball hit one just over the crossbar as Bexhill upped their game as the half went on.

Davies took one for the team as he tripped up Archibald as the hosts stole the ball in Bognor’s half. The physio had to give the tall striker some treatment which held up play. The Bognor defence dealt with the danger and Robb picked out Odokonyero who won a corner.

Bell played it in low and it bounced out to Crane who hit it early. It was saved by Rose and then Odokonyero on the follow up was also denied by the goalkeeper.

But Bognor extended their lead on 66 minutes. Bell's right sided corner found Robson. He powered his header towards goal but it was Odokonyero who latched onto the flying ball in mid-air to knock it in with his head.

A diagonal ball saw Odokonyero run inside with the ball. He beat one defender before neatly chipping the goalkeeper and bouncing it into the net to make it three goals to the good on 69 minutes.

Robson went into the book on 71 minutes for a foul on the halfway line. Odokonyero made headway as Bognor attacked again but Brook's eventual strike was well saved.

Robb found Brook out wide before he crossed it. The ball was hit with too much venom and bounced wide of the far post.

Brook ran inside and passed through to Odokonyero who managed to cut it back inside the area but it was defended with a corner awarded. Bell played it in again as Crane headed it low. It bounced out to Diedrick-Roberts who was also denied with a block which flew up high, bounced and somehow hit the top netting.

Odokonyero did well to steal possession before Robb ran on but his forward pass was deflected right into the path of Rose.

Brook passed onto Odokonyero who was unselfish to bring the ball back to Diedrick-Roberts who composed himself before slotting it low into the bottom right corner with his left foot on 81 minutes, making it 4-0.

Barnes came on for Davies on 83 minutes. This, after Bognor were awarded a freekick. Crane spun his freekick of the defensive wall and wide. Bell's corner kick flew out to Crane who nodded it wide of the left post from deep in the box.

Diedrick-Roberts was denied his attempt on the turn by the back of a defender. Bell's corner was straight onto the head of Dandy who diverted it towards goal. The ball caught a big deflection as it almost bounced in with Odokonyero in pursuit but it was somehow cleared.

In a nice touch, Jack Wyatt replaced Tangara on 87 minutes to get his first game under his belt. A swift cross found Archibald instantly catching Wyatt off his line, but he headed it over the crossbar.

Flannigan got Bognor's fifth goal on 88 minutes. He ran across the defence before firing it low and in with his left boot low into the bottom corner. A fine finish to cap off a game where Bognor were the stronger of the two sides are now see themselves in the quarter-finals round draw.