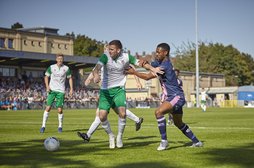 The Rocks Knocked Out Of F.A. Cup

Bognor conceded six goals as only a second half penalty was a consolation at Champion Hill, sending them out of the FA Cup in the Second Qualifying Round.

Jimmy Muitt returned from his ankle injury and went into the starting line up in as they took on Dulwich Hamlet of the National League South.

Jeffrey Monakana's cross from the right was knocked down to Nyren Clunis who hit it over the bar.

But Rocks fell behind early again as on just two minutes a swift header across the box by Danny Mills saw Quade Taylor tap it in from close range.

Doug Tuck got Bognor on the attack but Bradley Lethbridge was cut off at the last moment. Jimmy Muitt's short corner as a result to Harvey Whyte was blocked off for a throw.

Monakana's cross from the right was swung in on 7 minutes and again the ball fell down in the area for Nyren Clunis who swept it home to put Dulwich further ahead.

James Crane put another attack out for a corner on 12 minutes. But Bognor managed to clear the danger from the corner.

Another Monakana corner was punched out by Petar Durin but Richard Orlu on the follow up was blocked. The following corner found Mills who glanced his header narrowly wide of the far post on 16 minutes.

Whyte's cross was booted out from the right, winning Bognor a throw in. Then Ben Clark-Eden combined with Whyte before crossing it in but Tuck couldn’t get hold of it in the box.

Jimmy Muitt made good headway in front of the defence and managed to run square across them before shooting but it was a comfortable save for Ashley Maynard-Brewer who dived to his right.

A good passage of play saw Muitt win a freekick just outside the box. With Ashton Leigh and Tuck over the ball, Muitt ran over the freekick and Tuck pushed it to Ashton Leigh who smashed it into the defensive wall on 28 minutes.

Lethbridge did well to break down an attack before Muitt was left to run but his link up play with Tuck fell through on 31 minutes.

Muitt used his pace to win another freekick just outside the corner of the box. Tuck's short freekick to Dan Smith and back again saw the midfielder sky the ball over the bar from 25 yards on 39 minutes.

Bognor tried to thread the ball through after some good build up play in midfield with Tommy Leigh's pass, though it rolled harmlessly to Maynard-Brewer.

Bognor won another freekick just outside the right corner of the box. Muitt's freekick was headed out by David Ijaha as the game neared half time.

In the last chance of the half, Tommy Leigh won a corner on the left. Muitt's corner kick was directed at Smith but the attack broke down as Tuck was involved in a collision.

The ball was knocked forward to Clunis in the early part of the second half and he did well to run beyond Clark-Eden before belting the ball narrowly high and wide.

Tuck threaded the ball out wide to Lethbridge and he ran on before squaring the ball to an onrushing Tommy Leigh who hit a shot first time along the deck and wide of the left post on 50 minutes.

Then Durin dived to his right to deny Clunis whose header was nodded towards goal after Mills' flick on.

On 53 minutes a swift corner kick was flapped at in the air and onto the back post by Durin where Mills pounced to head it straight into the net.

Smith did well on the left side to pick out Lethbridge who did well to cut inside and get a shot away and forcing Maynard-Brewer into a deflected save.

Then Tuck found Muitt in the area and after turning onto his left foot he shot it low but it was well saved by the goalkeeper.

Ashton Leigh combined with Lethbridge who hit it early after running inside but his effort flew well over the goal.

Whyte found Muitt but he miscued his pass in the box.

But James Crane won a penalty soon after as he went for a high ball and was caught. Crane tucked the ball away sending the goalkeeper the wrong way on 62 minutes to pull a goal back.

Taylor required treatment after a challenge which held up play for some time. Then Clunis went to ground and claimed for a penalty which was ignored before Muitt won Rocks a corner. T

he ball was played square to Tommy Leigh who was blocked with his chance.

Then Dulwich sprung on the attack with a long ball by Ben Chapman and it was Monakana who ran onto it. With Durin out of position he rounded him but Durin came back and with Clark-Eden there somehow Bognor managed to clear their lines with the goal unguarded on 68 minutes.

Chapman did well to pick out the run of Mills and he had only Durin to beat as the goalkeeper denied him. Then Whyte felt a smack and went to ground after blocking a chance before Clunis' low ball was blocked off for a corner by Crane as Dulwich were building some momentum.

Another Mills goal came on 73 minutes after a swift cross in from Barnes on the right bounced kindly for him and he dispatched it beyond Durin, making it 4-1 for Dulwich.

Ade Yussuf dug out another cross straight after coming on off the bench and Mills was only just out of range on the back post.

Smith won a corner with a low deflected strike. Muitt's first corner was driven in but headed out. The second was inadvertently headed back out of the box by Tommy Leigh under pressure.

Mills received some treatment after going down in a crowded penalty area.

The impressive Mills teed the ball off for Yusuff and then his low shot was stopped by Durin on 81 minutes.

But Dulwich scored again on 83 minutes as Barnes sprung on the attack and used his pace and got deep into Bognor's half. He passed it along the deck for Yussuf who did really well to shoot low and beyond Durin into the bottom right corner.

Tommy Scutt played it forward allowing Smith onto the ball before he shot at goal from outside the box but it was easily saved.

Jack Connor chipped the ball towards Mills and he won a corner. It was driven in and only just cleared but the follow up by Clunis saw him run past the Rocks defence before smashing it low into the net in the 90th minute.

Whyte's late ball through defence saw Dan Simmonds pounce but his shot was deflected off a sliding defender and out of play.

The final whistle went after two minutes of stoppage time as Bognor crashed out of the FA Cup.

They now return to league action on Saturday 28 September against high-flyers Haringey Borough, with kick off at 3pm at Nyewood Lane.