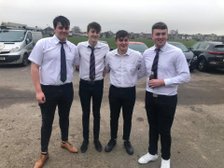 It was another momentous weekend for the Bognor RFC Colts Academy. On Saturday four of the squad played for the first team, two in the second team and three in the third team as all three senior sides had big league wins.
On Sunday, two players – Lewis Decarteret and Andrew Fadera were at London Irish for training with the London and South East Division under 18 squad.
Bognor Purples continued their unbeaten league run against an organised and hardworking Tadley side at a busy Hampshire Avenue.
The first half was a war of attrition with both sides attempting to break strong defensive lines. The lineouts were well matched with hooker Samuel Towler finding his jumpers with accuracy and the omni present Charlie Jays making dents all over the pitch. The back lines were also well matched with centres Arthur Wright and James Billingham regularly cutting down their opposite numbers.
Bognor back three of Harry Smith, Ben Tilley and Dylan Collier looked in dangerous mood – running the ball back at every opportunity and stretching the Tadley defence.
Tadley were first on the scoresheet as an over ambitious Bognor backs move broke down and their speedy winger scorched over for a converted try.
Bognor came back strongly with half time approaching. Stan Wright got the Bognor pack over the gain line, Ben Brandon cleared out the ruck and Nathan Chitty moved the ball wide to Harvey Henson. A dummy and step and the big second row crashed over to close the score at half time.
Bognor played with the wind in the second half and immediately used it to good effect to put Tadley under pressure. Owen Thomas rose like a serpent in the lineout. Jacob Towler drove on and man of the match Jack Trenham took six men with him over the line to score and give Bognor the lead. James Billingham converted. Mac Davis had a strong game and his run set up good position from the kick off. The ball was moved wide to replacement Jamie Foote who barrelled through several tackles to score. Bognor began to commit more numbers to the ruck which produced quicker ball. Charlie Weller hit a hard line to get Bognor moving forward and they formed a dangerous looking ruck on the Tadley 5. Scrum half Ollie Page saw a gap and flew through it to score a great try under the posts. Billingham converted. Bognor began to dominate as their fluent attacking play wore down the opposition. Skipper Oscar Henson provided his brother Harvey with a gap and the leggy second row accepted the opportunity to score his second try. Josh Galea had another excellent game despite suffering from illness and set up a platform. Alfie Spurle saw a gap in the Tadley midfield and streaked through it to score.
Tadley came back strongly with a well-constructed score before Tyrone Makasi has the last word as he hit a perfect line off Spurle to sprint in from half way.
Next week Bognor Greens visit Tottonians while Bognor Purples travel to Winchester.
Squad;
Jack Trenham, Josh Galea, Charlie Weller, Sam Towler, Oscar Henson, Harvey Hensomn, Owen Thomas, Ben Brandon, Stan Wright, Javob Towler, Charlie Jays, Nathann Chitty, Ollie Page, Alfie Spurle, James Billingham, Arthur Wright, Jamie Foote, Tyrone Makasi, Ben Tilley, Dylan Collier, Mac Davis, Harry Smith