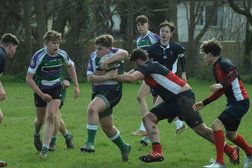 Bognor RFC Colts Academy 41 Cranleigh RFC Colts 7
Bognor returned to their Hampshire Avenue fortress on Sunday and defeated Surrey Colts Shield champions Cranliegh RFC in a feisty encounter.
Bognors off-loading game worked effectively from the kick off nullifying the visitors fine work at the breakdown. Benjamin Barker was omni-present and worked hard to secure clean ball. Matthew Norrell, ball in two hands got over the gain line with every carry. Skipper Alfie Spurle varied the point of attack and his cut out pass found Charlie Jays. The international life guard magicked an around the back pass to Benjamin Woolnough who crashed over.
Coach Tom Spurle had foretold that Tyrone Makasi would score a hat trick in the game and the twinkle toed centre didn’t need long too open his account as he cut a superb line to score. Cranliegh responded well but a powerful surge from Charles Weller got behind the visitors defence and Andrew Fadera was able to spot the gap and crash through to score. Woolnough converted.
James Billingham was having an assured game at full back and his electric break set up good field position. Woolnough found Makasi and the centre sped through for his second try on half time.
Winger Ben Tilley got into the action early in the second half with a scorching run that stretched the Cranliegh defence. Nathan Chitty moved the ball wide to Fadera who threw seventeen outrageous dummies on his way to the try line. Harrison Southern converted.
The visitors responded with a fine try themselves after constant pressure found a tiny chink in the Bognor wall and their flanker crash over for a converted try. Back came Bognor. Benn Brandon ran half the length of the field in a mazy run from his own line. The ball was moved the width of the pitch for Makasi to take the final pass and speed over for his hat trick. Fadera converted from the touchline. The game opened up and Harrison Southern made good ground juggling with the ball like a conjuror. The square jawed Jack Trenham, always difficult to bring to ground powered on. Bognor stretched the visitors defence and Dylan Collier who had been outstanding all game stepped his opposite man and accelerated away for a magical score. It was left to Tyrone Makasi to finish the game off as he glided through after great work by Harvey Henson for his fourth try converted by James Billingham.
Next week Bognor Greens host Gosport in a vital league encounter, 2 pm KO at Hampshire Avenue.
Three of the squad who rested at the weekend are starring for Worthing College on Tuesday as they take on Ampleforth College in the National Schools cup final at Allianz Park, home of Saracens RFC.
Bognor RFC Colts Academy themselves take on Winchester RFC Colts at Allianz Park on Sunday April 12th.
Squad;
Jack Trenham, Ethan Teasdale, Charlie Weller, Luiz, Harvey Henson, Matthew Norrell, Ben Barker, Charlie Jays, Ben Brandon, Andrew Fadera, Alfie Spurle (captain), Ben Woolnough, Ben Tilley, Harrison Southern, Tyrone Makasi, Dylan Collier, Nathan Chitty, James Billingham
Share via
FacebookTwitter
https://www.pitchero.com/clubs
Recent news