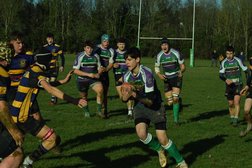 Sussex Cup 2nd round
Uckfield Colts 5 Bognor Colts Academy 31
Bognor travelled to Uckfield on Sunday looking to progress to the quarter finals of the Sussex Cup. This they did successfully winning by 5 tries and 3 conversions to one try. A strong squad started well with relentless line speed putting pressure on the host side and stopping them from playing. Scrum half Alfie Spurle got his forwards moving and powering over the gainline. A typical strong run from the impressive number 8 Bradley Smith saw the Uckfield defence scrambling. Ben Barker carried the ball on and the ball was moved wide expertly and slickly through their hands for Edward Gilbert Jones on the wing to score in the corner. Fly half Elvis Millen was having one of his best games of the season, regularly making spot on decisions. A beautifully judged kick saw Owen Henton regain possession. Hayes cut a strong line and the ball was moved to the rampaging Jamie Foote who dummied and scorched clear of the cover to score under the posts. Lewis Decarteret converted.
Bognor were playing smartly in attack but destructive in defence. No more so than Tyrone Masaki in the midfield who clattered into his opposite numbers. Uckfield cleared and Skipper Harrison Southerm ran the ball back. Charlie Weller smashed the ruck and the ball was moved to full back Decarteret who sizzled down the line to score in the corner. He then converted from out wide. Uckfield looked dangerous ball in hand but second rows Nathan Thompson and Matthew Norrell ruled the defensive line around the ruck. Half time 19-0.
The first score in the second half was always going to be important. Bognor sent on the cavalry with the aim of putting the game out of sight. After a disallowed try, George Orchard secured a tremendous turnover. The omni-present Jack Trenham thundered on. Spurle put in a long miss pass and Charlie Jays exhibited a perfect catch and pass to winger Jacques who skinned his opposite man to score. Decarteret converted. Uckfield’s centre broke through and with a score on the cards, Ben Woolnough appeared from nowhere to take him down. This galvanised Bognor. A purple patch saw them stretch the home defence with Owen Thomas and Josh Galea carrying impressively. Uckfield infringed and Bognors maul took them close to the Uckfield line with Andrew Fadera crashing over to score.
Uckfield came back to score a well-deserved consolation try.
Bognor will play Haywards Heath in the cup Quarter final on Sunday February 9th. Until then its back to league action. The Greens travel to Camberley while the Purples host Tadley at Hampshire Avenue 1pm KO.
Squad;
Jack Trenham, Harrison Southern, Charlie Weller, Josh Galea, Nathan Thompson, Mathew Norrell, Owen Thomas, George Orchard, Jamie Foote, Ben Barker, Charlie Jays, Andrew Fadera, Bradley Smith, Alfie Spurle, Elvis Millen, Owen Henton, Freddie Hayes, Tyrone Masaki, Edward Gilbert-Jones, Jaques Robinson, Ben Woolnough, Lewis Decarteret
Share via
FacebookTwitter
https://www.pitchero.com/clubs
Recent news