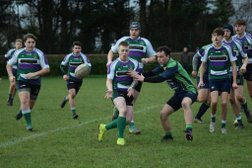 New Milton RFC Colts 17 Bognor RFC Colts Academy Greens 12
Nearly at New Milton!
Bognor greens travelled to the New Forrest on Sunday to face last season’s Hampshire Cup winners. They returned with a bonus point which could have been much more. Bognor had a brand new backline with several players out of position but all played superbly.
New Milton attacked from the off using their big ball carriers to good effect. However, Bognor defended stoutly, Matt Norrell and Ben Barker both putting in huge hits. It was only an intercepted try from a Bognor lineout that broke the deadlock. Bognor showed great shape in attack and regularly got on the outside of New Milton only for great cover defence to repel the visitors.
The conditions changed with a howling wind and hail blowing in to the Bognor team. A missed touch gave New Milton a sniff just before half time and a well-constructed passage of play saw them go in to half time 10-0 up.
Bognor began the second half determined to cut down errors and use territory to get into good attacking positions. The Bognor set piece performed like a well-oiled machine all game with props Charlie Weller and Joh Galea regularly pushing back their opponents. Bognor half backs Alfie Spurle and Ben Woolnough cleverly varied the point of attack using Harrison Southern and Jamie Foote to cause havoc in the hosts defensive lime. Sustained pressure saw Jack Trenham burst over for a well-deserved try and the game was on. Bognor continued to attack with intensity but fantastic defence from New Milton kept them out. With their first visit into Bognor territory, the hosts strong running number eight crashed over for a converted try. Nathan Thompson came on to secure clean ball and Ollie Page ran the ball with determination. A break from Foote and Charlie Jays found winger Owen Thomas free. The sprinter rounded his man to score under the posts. Norrell converted. With the last play of the match, Bradley Smith made good ground on one of his trademark runs. Ethan Teasdale continued the break and the ball was moved wide to Tyrone Masaki who nearly broke through. With the try line in sight, the ball was spilled forward and Bognor had to settle for a bonus point loss.
Next week the whole squad travel to Hove for a seasonal friendly in preparation for their appearance on BT Sports Rugby Tonight show on January 8th.