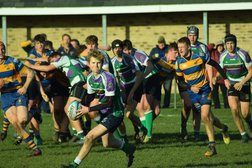 Bognor Greens visited sunny Gosport Park on Sunday in a break from league and cup duties. An experimental team mad too many errors early on and were punished by the pacy Gosport backline who raced in two well-constructed tries.
Bognor fought back. Owen Thomas ruled the lineout – at times it was if he had wings. Half backs Alfie Spurle and Hayden Kerr managed the attack to perfection, Bradley Smith ran hard and the ball was moved wide to winger Cellan Robinson who rounded his opposite number to score.
Jack Trenham carried well all game making huge ground and with man of the match Charlie jays omnipresent in support to recycle the ball, Gosport infringed. Hooker Ethan Teasdale, as accurate as ever, hit Thomas and the ball was moved expertly to the rampaging Jamie Foote who hit a great line to power over. Kerr converted to give Bognor a narrow half time lead.
The second half saw Bognor begin to dominate possession and territory. Charlie Weller, Teasdale and Trenham got the shove on in the scrum ably supported by the terrible twins Oscar and Harvey Henson. Elvis Millen and Tyrone Masaki are becoming a fantastic centre combination and their running lines and variety caused no end of problems for the Gosport midfield. A Masaki break put Gosport on the back foot and the ball was moved wide to Trenham, to crash over. Bognor went further ahead after debutant Enoch Hope and Ben Woolnough made good ground. A fluid backs move saw winger Edward Gilbert-Jones round his opposite man and bounce off three would be tacklers to score in the corner. Kerr converted majestically from the touchline.
With time running out and the game seemingly over, Gosport ran everything and were rewarded by two converted tries, the last converted from wide out after hitting the post in the last kick of the game.
Bognor Purples travelled to Trojans. Some fine performances were not enough as they ended up losing a tight game 35-24.
Next week, the Greens return to league action away at New Milton while the purples host Fareham Heathens.