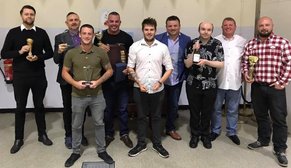 With the season now coming to a close, it's time to blow the froth off a few and reward those who have stood out on and off the pitch.

As always, there have been highs and lows throughout the year but in true Bolton Mets spirit we have stuck together and fought on regardless. Starting back in early February, we have played many games and been too many places, here is where we re-tell a few stories over a beer or two, whilst players, coaches, committee members and supporters mingle together and enjoy each others company.

The drinks will be provided by John and Danni at One For The Road, whilst Alain Job of Nkono will be knocking up some of his culinary delights; such as Curried Goat, Jerk Chicken, Meatballs, Jollof Rice and anything else he can think of to make the palette tingle. This all takes place at Bolton Market Lifestyle Hall, the same venue for each of the last 4 years.

The evening will culminate when Head Coach Al Scarbrough hands out the awards, these will include:

To help us cover the cost of the event, including trophies, venue and food, we ask that everyone who attends pays a £10 entry fee, something we think is a small cost for a very enjoyable event.

This is an open invitation, you don't have to have played every game to warrant an invite, each and every person brings something different to the club, even if you've been on the fringes or not around for a while, don't let that put you off from attending and sharing the evening with us. We hope to see you all there on Saturday 19th October, come and help us celebrate another year of bringing Rugby League to Bolton!

Share via
FacebookTwitter
https://www.pitchero.com/clubs
Recent news
This is a past event
1 members attending