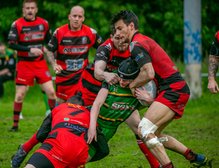 Club of the Season

Bolton Mets have been named Club of the Season for 2019 in NWML Division 5.

After some old school story telling from former Wigan Centre Bill Ashurst, the awards got underway. Each division had a Player, Coach, and Club of the Season award up for grabs, and as NWML Chairman Stuart Prior worked his way through the list we waited with bated breath to see if either of our guys would be taking home some silverware.

Unfortunately, Al was pipped to the Coach of the Season Award by Phil Woods of Newton Storm, whilst Patrick was beaten by Callum Southern of Golborne Parkside. The Mets contingent congratulated the winners, completely unaware that we would soon be celebrating a victory of our own.

Having named the Club winners from the other divisions, it was our turn to receive the good news. Stuart Prior hit the nail on the head with his words prior to announcing us as the winner, basically stating that it can be easy if you're winning games, but a whole different story when you find yourselves up against it week in week out. The passion shown by the club to provide our players with the opportunity to play Rugby League, and to continually strive for success, is second to none and deserves rewarding.

It was Chairman Stuart Cooke who went up to collect the award from Bill Ashurst, and having recovered from the shock he has this to say, "This is a great way to start our 25th Anniversary, and hopefully we can continue to make slow but steady progress and work our way up the league table in 2020".