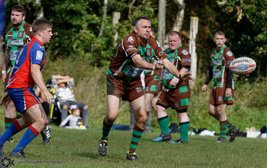 After some serious consideration, we are pleased to announce the man who will be taking charge of the team and leading us into the new season.

Having been a player in the 1980's and early 90's for Bolton RLFC, the club flying the flag for Rugby League in Bolton prior to the Mets, Sam Heyes has a vast knowledge of the sport and a wealth of experience to call upon.

In early 2017, Sam messaged Chairman Stuart Cooke offering to help out wherever necessary, and in the past three seasons has been a great help on match days, from putting out post pads and corner flags, running water, sweeping the changing rooms, and even putting a kit on when numbers were low. He has also enjoyed having a run out in our annual Old Boys fixture.

In late 2018, Sam gained his Level 2 Coaching qualification and became Assistant Coach to Al Scarbrough for the 2019 season. His role included taking various drills at training, having input into team lineup, and mentoring some of the less experienced players on a match day.

After Al Scarbrough stepped down, Sam took charge of our pre season training sessions, and even though we did advertise the position he had made it known he was interested. Having done such a grand job in pre season, and with his existing rapport with the players, Sam was the perfect fit as Head Coach.

Supporting Sam in his new role, we will again have Darren Robinson Snr in place as Assistant Coach, but we will also have experienced player Kieran Lockett offering help & advice, as well as being the link between players and coaches. Having played at a decent level with Folly Lane and Rochdale Hornets, Kieran can pass on some of his knowledge to the players on the training field, but also during a match.

We wish Sam, Darren, and Kieran all the best in their new roles, and with some hard work, determination, and a bit of luck along they way, we hope to be in for a successful and enjoyable season.