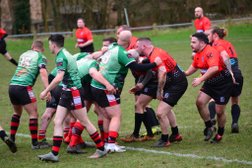 The time has come to finally announce the divisions and league structure ahead of the new NWML season.

We already knew that the scheduled start was Saturday 8th May, however, we now know who we'll be playing against over the course of the season. It's looking like we'll be coming up against some teams for the first time, or at the very least for the first time in a few years, which should make for some interesting battles throughout the year.

With so many teams asking to be placed in Division 5, the NWML have decided to split it into two smaller divisions which will make things more manageable for all concerned. We have been grouped with Ashton Bears A, Burtonwood Chargers, Halton Simms Cross A, Ince Rose Bridge A, Runcorn and Waterhead Warriors A. This will mean 12 games (6 Home & 6 Away) and 2 byes over the course of 14 rounds, however, teams from the Merit league are being asked if they may want to step up and make it an 8 team division. If not, we can always arrange a friendly against a team from the Merit league on our bye weekends if the players are keen to play more games.

The fixtures will hopefully be confirmed by the end of next week but in the meantime we can confirm that the season will run from 8th May until 21st August, with the possibility of playing additional games in September depending on how the season has progressed. It finally feels like we're heading towards normality, let's hope for a good season and just enjoy being back out on that field.