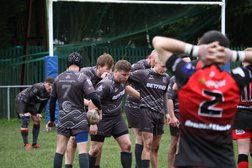 The year started out a little differently to the previous few, we needed to appoint a new Head Coach for the first time since 2016 after Al Scarbrough had to step down due to family and work commitments. Even though we advertised the position, Assistant Coach Sam Heyes had made it clear that he would be interested in the role, and after a couple of discussions between himself and the Chairman he was appointed the new Head Coach.

With the club looking to celebrate our 25th Anniversary in 2020 we were looking forward to having a good season, plus we had plans to put on some special social events throughout the year to commentate our achievements. But first and foremost, an anniversary season means a new kit, and for a new kit we need sponsors. With the help of former player Dave Cain, we were able to pull off a major coup and secure Betfred as our main shirt sponsors. Betfred are the title sponsors of Super League, Championship, and League 1, plus many other sporting events, so to have their name and logo emblazoned on the front of our kit was quite a big deal.

As well as bagging ourselves a big name main sponsor, we were also able to continue our partnership with Greenhalgh’s Craft Bakery, the providers of our after match food, because what else could 34 Rugby League players want after 80 minutes hard graft than pies, pasties, and sausage rolls?!?! Also continuing their partnership with the club, were Plus Opto, Essa Sports Centre, Bunbury’s, and Superior Design, showing that mutual support from club and local companies is integral to community sport. Completing the sponsorship list, we had Sparky’s mate and Facilitas joining the ranks as well, and it was a pleasure to have these 8 companies onboard.

Now, kit designs have always been a big part of our club and this year we wanted something that had never been seen before. Home & Away kits were mocked up for us, with the Home kit brief being that it only had to focus around the colours Red, Black, and White, whilst the Away kit was to be monochrome. When we say monochrome, we don’t mean Black and White, we wanted all the varying shades of Grey in between Black and White, everything, including the club badge, the sponsors logos, the pattern on the kit, and the numbers on the back where to be without colour. The idea behind this was the fact that the 25th Anniversary gift is Silver, and as we couldn’t have Silver we opted for the closest alternative.

Most of you would have seen the playing kits by now, and we hope you’ll agree that they are outstanding. The designs are exactly what we wanted, the sponsors have offered us valuable support, and the designer themselves has done a fantastic job for the club. Hopefully, these will be with us for a good few years to come because I for one think they are the best kits we have ever had.

Getting into the action, we commenced our pre season training in January, using the excellent facilities at Essa Sports Centre, and with some good numbers in attendance, even getting over 20 on occasion, we had some good positivity within the camp ahead of the season. Also, with a number of new recruits mixing in with the existing players, things were looking up.

For the opening fixture, a cup game away to recently reformed Bold Miners, we were able to hand debut shirts to 6 players, those being Rik Fletcher, Dan Robinson, Stephen Holton, Tom Loney, Scott Ramage, and Sheldon Fitton. Bold won the game comfortably, but a week or so later the NWML promoted them from Division 5 up to Division 2 based on the clubs previous history and personal requests.

To start the league season, we welcome Garswood Stags A to Greenhalgh’s Pavilion, Steven Hookham the only debutant for this game, however, it was the first game for the club in close to a decade for Chris Clarke, plus only 7 of the 16 players from the cup game were available which meant wholesale changes to the line up. The game started ok, but after 20 minutes or so it became a horror show, a broken collarbone for Sheldon Fitton, in only his second game of Rugby League, was quickly followed by an injury to Captain Rick Ackers, possible ligament damage. Both players had to visit A&E to assess their injuries, leaving us with only one player on the interchange bench. Other knocks during the game really took their toll on our squad, resulting in a defeat, but positive performances from Tom Cain, Tom Bradley, and Paul Charnock to name a few, helped lift the spirits.

Another game another debut, this time it was Jack Brownbill making his bow Away to Ince Rose Bridge A. With limited numbers, and playing against superior opposition, the game quickly got away from us, but as is the Bolton Mets way, we stuck to the task for the full 80 minutes. Even at this early stage of the season, other clubs were already forfeiting games, this is not something Bolton Mets ever consider, it would have to be something really drastic for us to cry off!

Now, this is where things take a strange turn, a global pandemic meant the whole world came to a complete standstill. Factories and offices had to alter their work patterns or shut, retail and hospitality businesses are forced to close, and all professional and amateur sport ceases immediately, it’s like something out of a Hollywood film. The hope was to get things back up and running again within 3 weeks, maybe a month, but 7 months down the line and things are just as chaotic as ever. The season went from being delayed, postponed, to cancelled completely. We managed to get a few training sessions under our belts in July/August but when things started to worsen we decided to finish for the year. Even though the RFL were proposing friendlies in October, we just couldn’t see the rules being relaxed enough to make it viable, so we pretty much knew that it would be next year before we got back on the pitch.

With things coming to a close in 2020, all we can do is plan ahead for 2021 and hope for the best. Bolton Mets will aim to commence pre season training in January and continue our recruitment drive for new players. We currently have a good squad of players but we’re always looking to improve. Maybe we’re lacking a bit of experience, players with good rugby league brains, old heads who know how and when to change the game, or younger players with raw enthusiasm and passion, whatever your playing level, we would like to hear from you. Bolton is a huge town but we do struggle to attract players from the local boroughs, maybe they’re more interested in football or maybe they don’t have what it takes to play Rugby League, who knows, but hopefully if anyone sees this then we wholeheartedly encourage you to get in touch. Players are also welcome from further afield, Wigan, Leigh, Salford, Oldham, Rochdale, Bury, etc, if you’re prepared to travel and put in the effort then there will be a place for you here at Bolton Mets.

As we were unable to hold any social events this year, we will be looking forward to bringing back some old favourites in 2021, like the monthly team meals, nights out in Bolton, the Ken Jones Memorial Bowling Day, and above all, a Bolton Mets tour. As well as all that, we will have the Rugby League World Cup taking place in England late next year, with the UoB Stadium hosting England vs France and a Quarter Final, plus we shall be the host town of France, who will stay and train in Bolton during the tournament. Who knows what else we will come up with over the course of the year, but if you want to be a part of it, feel free to get in touch with Chairman Stuart Cooke on 07802 608256.