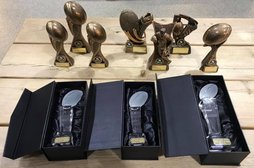 As our 24th year as a Rugby League club comes to a close, we thought we’d take a look back and review the seasons highs & lows.

After using the excellent facilities at Essa Sports Centre for our pre season training, we took on Garswood Stags in our first friendly and fought out an entertaining 40 all draw. Obviously, the defences of both sides needed some work, but the attacking skills were certainly there for all to see. A four try haul by Patrick O’Brien was the major highlight of the game, closely followed by Mark Riley opening his Mets account after a flowing team move that came straight from the training field.

The 6th Annual Old Boys game was up next, a fierce encounter that ebbed and flowed from the first minute until the last. With the current Mets side leading throughout, it was a try 10 minutes from time that put the Old Boys in front, before a penalty from Daryl Devlin tied the scores at 20-20. A drop goal by Ste Hickey, playing for the Old Boys for the first time, gave them a one point advantage with minutes to go. Looking to tie the scores again, Devlin went for a drop goal attempt only to see it charged down by Colin Crompton, that was enough to win the game for the Old Boys and make it 4-2 in the series.

Having contested two closely fought pre season friendlies, it was time to turn our attention to the league season. An opening game versus the newly reformed Newton Storm ended in a disappointing defeat, but this was quickly wiped out by an Away win to Golborne Parkside and an encouraging Home display against Rylands Sharks. The opening third of the season finished with two big defeats Away to Higginshaw and Blackpool Stanley, something we would be working hard to make amends for before the next fixture.

With Head Coach Al Scarbrough, and his Assistant Coaches Darren Robinson Snr & Sam Heyes, putting the players through their paces at training, we had an instant response as we hosted Salford City Roosters A at Greenhalgh’s Pavilion on Saturday 13th April. With 10 tries, including a hatrick for both Jonathan McMillan & Patrick O’Brien plus a 100% record with the boot from Devlin, we recorded a 60-16 victory to take us into the Easter break in a good position.

Upon our return, despite having control for the majority of the game we lost to close rivals Wigan Spring View A, allowing them to leapfrog us in the table. This was followed by the visit of league leaders Clock Face Miners A, who had opened up a 24-6 lead early in the second half. In previous seasons, such a deficit would have meant game over but the spirit within the ranks was high and we completed a miraculously comeback to tie the scores at 24 all in the 70th minute. Both sides were going for the win, chances being denied at either end, but heartbreak was to follow when a high bomb was collected by the Clock Face Winger who went on to score the winning try. A narrow defeat to the league leaders was obviously disappointing, but also encouraging in the same breath, we had pushed them all the way and could take serious confidence from the comeback and performance.

We took that confidence to Warrington the next weekend as we faced Rylands Sharks, only to find ourselves 18-0 down after half an hour despite having several clear cut chances to score. Having comeback from 18 points down the previous week, only to be defeated in the last few minutes, we managed to go one better this week and take the lead. Some fantastic Forward play by Chris Lane and Niall Murphy caused the Sharks all sorts of problems, but it was the Backs who benefited and scored the points. The win was our third of the season, however, with Salford already dropping out of the league the withdrawal of Rylands a week after this game meant we now had two of the three victories taken away from us. This, on the back of losing three wins last season, was a really sucker punch to the team and in all honesty played a big part in derailing our season.

A cup game against Blackpool Scorpions in early June ended in defeat but again gave us positives to work with. Scoring 4 tries against a team top of the division above was a great effort, and having new recruits like father and son pairing Gary & Ethan Hill helped make it a good day. Unfortunately, this is when the wheels started to fall off as we lost players to injury, Rugby Union and other personal commitments.

Some heavy defeats followed between now and the end of the season, but we did what we could to take the positives out of them. Those positives included; a successful Friday night fixture with pitch side BBQ, Daryl Devlin reaching 200 points for the club, a more competitive result against Blackpool Stanley, and having a good network of players we can call upon when we were desperately short of numbers.

As well as those positives, we also had international representation as Captain Rick Ackers travelled to Jamaica with the NWML English Lionhearts, with the addition of Chairman Stuart Cooke also in the touring party as Kit Man, and returning with an unbeaten record. This was added to in October with victory against Germany on home soil prior to the Super League Grand Final.

Not quite as far afield as Jamaica, the club went on tour to Newcastle in August and took part in a great day of Rugby League at the home of Whitley Bay Barbarians. We were playing against a North East Select XIII, ahead of the North East Grand Final between Jarrow Vikings and Edinburgh Eagles, but like so many games this season we were narrowly beaten by a late try. The result didn’t go our way, but it was another good weekend away for the players and staff.

The final game of the season saw us visit Wigan Spring View A, knowing a win would mean we would leapfrog them in the table and stand a chance of finishing above last place, however, it wasn’t to be and the season came to an end with us finishing bottom of the table in 7th place.

Given how close we came in several games, we think a bit more composure, and killer instinct, we could have recorded at least 2 or 3 more victories over the course of the season, but what we will do is take this into next season and try and learn from our past mistakes.

The End of Season Awards brought the curtain down on all the action, with 7 players taking home 10 individual awards. Al, Darren and Sam handed out the trophies, giving reasons why those players had been chosen. The winners were as follows:

Oppositions Player of the Season (3rd place) - Tom Bradley
Playing 13 games in his first season, Tom is relatively new to Rugby League but certainly impressed many with his hard running and tenacious tackling technique. For some reason Tom found himself on the wrong end of several high shots during games, but never shirked responsibility when it came to taking the ball up next time around.

Oppositions Player of the Season (2nd place) - Daryl Devlin
After suffering a fractured cheekbone in the Old Boys game, it looked as though Daryl was going to be missing for a big chunk of the season. However, having missed just 3 games he came back 5 weeks later with a spell from the bench versus Higginshaw, and ended up playing 17 out of 21 games.

Oppositions Player of the Season (1st place) - Patrick O’Brien
After suffering a knee injury on his Mets debut in 2016, Patrick returned to action late in 2018 to make 2 appearances. On the back of a full pre season, Patrick hit the ground running and never dropped down a gear throughout the year, only a desire to go travelling curtailing his season. With seven MOM awards in 12 appearances, Patrick was the stand out performer for the Opposition Coaches.

Top Try Scorer - Patrick O’Brien
Carrying on from where we left off, Patrick also scored 16 tries in his 12 apps, including 4 tries in a pre season friendly, plus a hatrick, and two braces in the league and cup. He was a constant threat, whether playing in the Centre or at Full Back, and deservedly picked up two awards on the night. A worthy mention must go to Jonathan McMillan who scored 10 tries overall, 5 in the league and cup.

Most Improved Player - Callum Smith
Having played 8 games in his debut season, Callum doubled his tally this year and came on leaps and bounds. Often one of the first names on the team sheet at Wing or Centre, Callum was one of the most committed players within the ranks and really came to the fore in 2019. A couple of other players deserve a mention, those being Mark Riley and Jonathan McMillan.

Coaches Player of the Season - Paul Charnock
Paul played 17 out of 19 games in 2018, and even after suffering a broken hand in pre season he ended up playing 14 out of 21 games this season. One of the reasons Paul won this award, is his ability to play in several positions, Al pointed out that he has had to use Paul at Full Back, Wing, Centre, Half Back and Hooker this season, and despite all this Paul never complains, he just gets his head down and does what he can to help the team. Having been with the club for many years, the past 2 seasons have been the most consistent Paul has been and it is certainly paying dividends.

Club Player of the Season - Darren Robinson Snr
Darren missed most of 2018 due to undergoing knee surgery, but having completed his rehab he was ready to make up for it this year. Playing in 20 out of 21 games this season, Darren’s commitment was second to none, and adding to the fact that he had joined the coaching team as Assistant Coach he was thoroughly deserving of this award. Anthony Knight, Callum Smith and Mark Riley were in contention for this award, but Snr just took it.

Players Player of the Season (3rd place) - Callum Smith
Picking up his second award of the night, Callum received a number of votes from his teammates earning him 3rd place, which goes to show how much he is respected and how well he has improved in the last 12 months.

Players Player of the Season (2nd place) - Jonathan McMillan
With the awards that have gone before, Jonathan was very close in a number of them, however, on the back of some outstanding performances he was voted 2nd place in Players Player of the Season. He was up there in the try scoring charts, was pretty consistent throughout the season, and was voted Top Tackler more than any other player, despite playing at Stand Off. Jonathan was outstanding as a running Half Back, and hopefully we can see more of him in 2020.

Players Player of the Season (1st place) - Daryl Devlin
Claiming the players vote for a second consecutive year is almost unprecedented, but Daryl has done just that thanks to some consistent and committed performances. He is a quality Half Back, with a fantastic kicking ability off the tee, and having surpassed the 200 point mark for the club he has already put his name in the record books.

All in all it’s been another tough season, but with the club looking to celebrate its 25th Anniversary in 2020 we hope to continue making strides forward and progress both on and off the field. If you want to be a part of it, either as a player, coach, or volunteer, then please don’t hesitate to get in touch with Chairman Stuart Cooke. You can call/text on 07802 608256, email at boltonmets@hotmail.co.uk or find us on Twitter (@BoltonMetsRLFC) or Facebook (Bolton Mets).