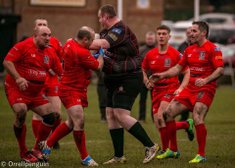 What Does Rugby League Mean To You?

What Does Rugby League Mean To You? Well, to answer that question, here is our Chairman Stuart Cooke on what it means to him.

In March 2000, I joined Bolton Mets as a shy, overweight 19 year old, fast forward 20 years and I am still here, as a less shy, but probably more overweight 39 year old. I never thought for one minute that I would be spending half my life at this club, but it is all down to the sport of Rugby League that I have.

I was looking at joining a sports club as a way of getting some exercise, and being over 6 foot tall and carrying some weight, Rugby League seemed like a good place to start. Even though I had no previous Rugby League experience, either playing or watching, I made contact with Jack Dorning and got some details.

It turned out that Bolton Mets trained at Withins School, my former secondary school, and it was that little bit of familiarity that helped make it easier than it could have been to attend that first session. By pure coincidence, the first person I spoke to was Neil Walsh, who actually lived on the next street to me in Breightmet, but as we went to different schools we weren’t close friends.

With the session finished, and me sweating profusely, it was time to head home and ask myself the question, will I go again next week? The answer was yes, and for the next few weeks I attended every session, enjoying it to my own surprise. After a month or so, I decided it was time to put myself forward to play, my debut being Away to Golborne Parkside. Coming off the bench for the last 10 minutes, my game consisted of a few tackles, quite well executed if I do say so myself, and a couple of ball carries. That was it, I was hooked!

Over the next decade, I had some high points and some low points, but it was the sport of Rugby League that kept me involved. The people within the sport also help make it what it is, it’s not just the ‘on field’ stuff that keeps you going, but the volunteers and other players that welcome you and become like your extended family, that make you want to come back again week after week. Without these people, the sport would not exist today, so my advice to anyone is, don’t take them for granted.

Around 2010 things started to change, as the previous Chairman and Secretary decided to step down it meant others had to step forward and continue where they had left off. A couple of people had a crack at various roles but couldn’t commit enough time to do it justice, so up I stepped.

The next few years saw me take on the Secretary, Treasurer, and eventually Chairman roles, holding all three simultaneously for a good period of time, and basically running the club single handedly. As tough as this was, it helped me develop skills that I would never otherwise have had, and to be at the helm of a club that has had to work so hard just to survive is something to be proud of.

For 20 years I have been involved with Bolton Mets and Rugby League, and in that time I have played with and against some amazing players, been responsibly for getting and keeping other new players involved with the game, had the most fantastic social life with the best lads and lasses you could ask for, attended club tours in the UK & Europe, and been lucky enough to visit Canada, Serbia, & Jamaica, with the North West English Lionhearts.

All in all, it’s been a great 20 years, and if anyone is out there thinking Rugby League isn’t for them, I can categorically say that it bloody well is. As with anything, there are positives and negatives, but on the whole Rugby League is an all encompassing sport, and everyone is welcome to play, watch, or volunteer. Get in touch with Bolton Mets, or any club local to you, if you want to get involved.

So, what does Rugby League mean to me? It means everything!