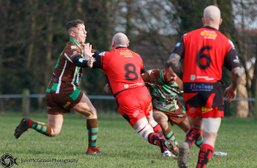 Sharks Not So Much Out Of Water

With games falling foul to the weather all over the North West, you can always count on Bolton Mets to make sure a game of Rugby League is played when scheduled.

A 10am inspection down at Greenhalgh’s Pavilion showed just how well the pitches cope with the bad weather, and how well they are looked after by the groundsmen at Bolton Rugby Club. The rain certainly left its mark, but as it was solid under foot the pitch was declared playable.

We started well and quickly opened the scoring, a neat little grubber kick by Kieran Lockett gave James Lacey a chance to chase the ball down and score. Beating the Full Back for pace, James dived onto the loose ball and scored his second try for the club, 2 years after scoring on his only previous outing for Bolton Mets. A scuffed conversion by Lockett failed to add the extras.

Rylands got back into the game with a try soon after, with the Half Back taking the ball to the line he dropped the pass inside to the hard running Forward who then went in to score. A second try soon followed for the Sharks, after what appeared to be a knock on at the play the ball the Mets players expected the referee to blow his whistle, this didn’t happen however and the Rylands player took advantage to sprint away. Two successful conversions now put them in front 12-4.

Going forward we really did look dangerous, the next score came from another grubber kick, this time Steve Harrison, and it was finished off by Winger Mark Riley in the left corner. Lockett again failed to improve the tally, leaving us 4 points adrift.

With 5 minutes of the half remaining, a little scuffle ended with a Rylands player being sent off for a head butt. The Mets players stood their ground and were able to reset for the next attack. The Forwards did the hard work for the first three tackles before Hooker Lockett spotted a gap, he took the opportunity to go for the line and slide in for his second try in two weeks. As he scored just to the left of the posts it made the conversion a forgone conclusion, the score was now 14-12 to Bolton at the turnaround.

Despite having 18 players in the squad, some little niggling injuries meant a reshuffle for Al Scarbrough and now meant he only had 2 fully fit subs. Tom Bradley was the worst of the injuries with a twisted knee, but hopefully he wont be out for too long after an impressive start to his Mets career.

As Bolton now had an extra man you would think the game would be more one sided, unfortunately, the Sharks weren’t prepared to roll over and even regained the lead early in the second half.

We started to lose control of the game and allowed Rylands too much time and space, lack of line speed gave the Away side the chance to work up a full head of steam and bust through some tackles. This then put them on the front foot whilst the retreating Mets defenders floundered, another inside ball catching us out and increasing their lead to 10 points.

Leading from the front, Neil Walsh was making great inroads into the opposition half, on one such carry he tried to crash over and score. Watching from the side line, it looked like he had managed to get the ball down, however, with several defenders around him the referee declared him to be short of the line. Unfortunately, from the resulting play the ball we couldn’t find the chink in the Sharks armour to get us back in to the game.

The game was now coming to a close, we were down by 10 points and had let the win slip through our fingers. One final attack on our line by the Sharks saw Neil Walsh shoot out looking for a big hit, but this only left a hole in the line for the Rylands player to run through. As the kicker slotted over his 5th conversion from 5 attempts, the score was now 30-14.

The defeat was a tough one to take, we know we should have, and could have, taken the victory, however, it was a great improvement on last seasons result and so we will take the positives from the game where we can.

Neil Walsh was named as Oppositions Man of the Match, beating Stand Off Jonathan McMillan and Full Back Pat OBrien to the prize, for his hard running and tackling. McMillan was awarded Top Tackler for the second week running, something he is enjoying, and excelling at, since his move into the Halves.

Due to a number of players attending the Stag Do of Walsh next weekend, we will be back in action on Saturday 30th March with an Away trip to Oldham to face Higginshaw.

Meeting at the Greenhalgh's Pavilion changing rooms at 1.15pm, with all players changed and ready to warm up by 2pm