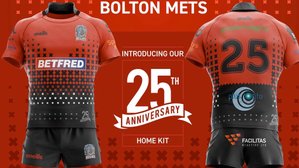 For the opening round of NWML Division 5, Bolton Mets hosted Garswood Stags A on Saturday at our Home ground of Greenhalgh’s Pavilion @ Bolton Rugby Club.

This was to be the first league game for the side from St Helens, after a season of friendlies in 2019, and there was no doubt they were in for a battle. Having faced them in a mid season game last year, and having faced their first team on several occasions we knew it was going to be a good game.

Bolton Mets had to make wholesale changes from our cup game a week prior, only 7 of the 16 players from that fixture were available for this one, and with another debut handed out to Steven Hookham, and a return from the wilderness for Chris Clarke, it was yet another ‘unfamiliar’ line up for the Mets.

The game was a tight affair for the opening 20 minutes, with both sides settling into the game and defences coming out on top. A strong carry by Sheldon Fitton saw him met firmly by three opposition defenders, unfortunately, this contact was enough to result in a trip to A&E and a diagnosis of a broken collarbone.

Garswood managed to break the deadlock not long after our injury set back, and with a successful conversion had a 6-0 lead. Despite this, we soon bounced back with a try of our own, Tom Cain going over from close range after some excellent forward play to put us in decent field position. Paul Charnock added the extras to tie the scores at 6-6.

Next up we were dealt another blow, in the act of taking the ball, in Rick Ackers collapsed to the ground in agony. With medical assistance on hand, he was treated on the pitch before being moved to the side line, there an initial assessment suggesting a partial ligament tear. Not the start we wanted to a new season, and certainly not for Rick who had spent most of last year out due to a groin injury.

The score remained tied at half time, this despite Tom Cain crossing the line again only for the referee to adjudge he was inches short. Our new Head Coach Sam Heyes, gathered his players together at the break and praised their efforts. A player with lots of experience, Kieran Lockett, even described the half as ‘the best 40 minutes of Rugby League by Bolton Mets in years’. The morale was high, but with only one fit substitute we knew it was going to be a tough ask in the second half.

Garswood had a mixture of youth and experience in their squad, and this proved invaluable when a neat kick to the corner was collected by the Winger before diving over. Another successful kick helped them regain a 6 point advantage.

In recent years, Bolton Mets have shown some good character when behind in games, here it was Loose Forward Tom Bradley who dragged himself across the line to give Paul Charnock an easy conversion to tie the scores again.

With the injuries racking up, knocks for Andrian Gribbin, Tom Bradley and Stephen Hooton added to the list, we started to feel the pressure. Players not used to playing a full 80 minutes, or those making a return from a layoff, were struggling for energy and it showed. This allowed the Stags to find a few late retreaters in defence and make several breaks, two tries followed that now opened up a 12 point lead.

Far from down and out, we hit back with a delightful try from Tom Cain. After he broke through a tackle, he stood up the Full Back with some quick feet and sprinted past him to score his second of the afternoon. Having taken on the kicking duties this season, Paul made it 3 from 3 to narrow the lead back to 6.

As we entered the final 10 minutes, the side were out on their feet, Full Back Chris Clarke the latest to need treatment for a knee injury. The Stags again managed to score back to back tries, the first a barge over from a big forward and the second a score out wide by the Winger.

The game came to end not long after, a 34-18 defeat was the result but we were really proud of the performance. A topsy turvy start to our 25th Anniversary hasn’t helped, but as many people keep telling us, Bolton Mets are a club to be envied for the sheer determination to keep going in the face of adversity.

At just 18 years of age, Tom Cain is without doubt a real talent, and the opposition Coach agreed by awarding him the Man of the Match. Tom Bradley, and veteran Andrian Gribbin, were named as runners up, but the whole team deserve praise for the performance. Even though he played a pivotal role in attack, it was his defence that earned Paul Charnock the Top Tackler award.

After having 2 players in A&E, and several players leaving the field a little worse for wear, we wish all players a speedy recovery, and hope to see them back on the field sooner rather than later.

Next week, we travel to Wigan to face Ince Rose Bridge A in round 2 of the NWML.

Meeting at the changing rooms at 1.15pm, with everyone ready to warm up by 2pm. If you require strapping from the First Aider, please arrive as early as possible