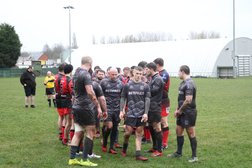 A Bridge Too Far

For Round 2 of the NWML, we visited Ince Rose Bridge for the first time in over 15 years.

The Wigan club recently formed an A team from the remnants of New Springs Lions, and with a First team in the NCL, and a vibrant Youth set up, they were putting together quite a formidable squad.

Bolton were low on numbers, with injuries and other personal commitments keeping people away, so we had to do the best we could to field the most balanced team. A bit of reshuffling was required to the starting 13, but with only 1 sub on the bench at the start of the game we knew it was going to be a tough afternoon.

The Home side were well drilled, the mixture of youth and experience was a potent combination, and this led to an early try in the right corner. This was quickly followed by another down the left, a breakaway try from the Centre who had pace to burn. Two successful conversions made it 12-0.

A couple of early injury concerns had us worried, Scott Ramage struggling with a groin strain and Kieran Lockett with a twisted ankle, but we fought on with 12 men for periods so that they could at least get looked at by the sideline medical support.

We were struggling to get any rhythm in attack, and with the ball going to ground on several occasions we were only gifting possession back to Ince. This allowed them to capitalise with a few more tries and open up a 30-0 lead.

Despite being up against it, some really positive talk was coming from the Mets ranks, Jason Nuttall and Andy Platt leading the calls to ‘keep your heads up’, whilst Captain Kieran Lockett gave his constructive feedback.

Rose Bridge have come down from NWML Division 4, and even though they may have struggled last season they now had a squad firing on all cylinders. Two more tries before the break game them a 42-0 lead, the kicker successful with all 7 conversions.

Head Coach Sam Heyes did what he could at half time to encourage the players, and with club stalwart Joe Harte kitting up on the sideline, having already played 2 hours of Masters RL, he was able to switch a few things around.

Moving from Full Back to Second Row, Adam Millington continued his strong carries and really gave the defenders some problems. Some quick play the balls allowed Tom Cain to gain additional yards and put the Mets on the front foot. We attacked the Ince line for a good period in the second half, but just couldn’t quite find the gap required.

With the big crowd making their way in doors due to the rain, the Home side increased their lead with another try, but Bolton soon had one of our own to celebrate.

Some strong defence by Tom Bradley, Andrew Mulligan, and Steven Hookham, helped restrict yardage for Rose Bridge, and when the ball came loose in the tackle it was kicked forward by Tom Cain. In what became a foot race between Cain and Millington, it was the youngster who won out and dived on the ball in the in goal area. Paul Charnock stepped up to convert the try and add the extras.

This was the catalyst for some sustained pressure, Callum Smith and Rik Fletcher took some work off the Forwards, whilst Lockett and Charnock organised the plays. Leading from the front, Jason Nuttall was also putting in an impressive performance, this is encouraging for the remainder of the season.

Our defence had improved immeasurably in the second half, and even though this was stifling the Home side somewhat, they still managed to extend their lead with two further tries. They had to attack the edges to find space, because the Mets middle held firm when necessary.

Playing in his preferred role of Full Back, Joe Harte had some real input into the Bolton attack, a kick through forced a drop out and repeat set, before some link up play saw us try and get round the outside of the defence.

One final try for Ince sealed the win, a convincing victory for a team who will no doubt finish close to the top of the table come September. Bolton Mets find ourselves on the end of some big scores during a season, but we’re always looking to improve, this is a slow but steady process and with some hard work we hope to make some progression as the season goes on.

The opposition coaches picked Tom Cain as Man of the Match, with Kieran Lockett and Tom Bradley runners up, whilst Andy Platt was picked out by Sam Heyes as his Player of the Match. With several candidates for Top Tackler, Tom Cain & Tom Bradley to name just two, it was Adam Woods who took the honours.

Training continues on Tuesday evening, from 7pm, at Greenhalgh’s Pavilion @ Bolton Rugby Club, and any new players are encouraged to attend. As training is free, all you need is a pair of boots and water bottle, come along and introduce yourself.

Next week we face Eccleston Lions, the game will have a 2.30pm KO in St Helens, so if you’re in the area why not stop by and cheer us on.

The club would like to thank Glen King of GK Photography for sharing his photos of the game with us.