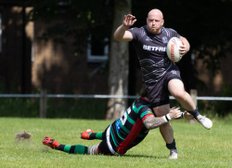 It was top vs bottom at Greenhalgh’s Pavilion this weekend, so it could only finish one way, right?

After a 74-0 defeat in Oldham earlier in the season, we knew this was going to be a tough encounter, but as always, we went into the game with confidence and a desire to win.

Unfamiliarly for Bolton Mets, we were quick out the blocks and put the first score on the board within 3 minutes. Niall Murphy, playing at Hooker this week, took the ball to the line and spun out of a tackle before touching the ball down. A sliced conversion attempt by Chris Clarke meant the score remained at 4-0.

Waterhead then hit back with a try of their own, a wrap around play creating a gap for the quick footed Half Back to run through, and with a successful kick it gave them a 6-4 lead.

On the back of some strong ball carries by Gavin Corfield, Chris Lane and Louis Critchlow, we found ourselves close to the Waterhead try line. Jumping into the dummy half position, Will Bate spotted a gap and burrowed his way over for our second try. With Clarke off the field, Joe Harte stepped up to slot over the extra two points.

Try number two was quickly followed by try number three, Niall Murphy again the player placing the ball down, but it was after some good work by Paul Leigh, Darren Cosgrove and Sam Smith. Harte’s kick increased the lead further to 10 points.

Bolton looked to be on a roll, an attack from deep in our own half saw Louis Critchlow break down the left and then pass to the supporting Winger, however, Shaun Watson was unable to take in the pass despite an open field in front of him.

Late in the half, Waterhead were able to score their second try and get themselves back into the game. Frustratingly, it was a walkover try for the Hooker from only a few yards out, this due to some poor defensive play by the Mets. With the kick flying between the uprights, the score was now 16-12 to Bolton as we went into half time.

A rallying team talk from Head Coach Al Scarbrough during the break helped keep the players focussed and gave them the confidence to go out in the second half and do even better than they had in the first.

Rugby League is a game of extremes, you can have tall & heavy Prop Forwards and short & slim Wingers all mixing together on the same field, and this is where each individual player is as important as the next. Some great work by the Forwards help set the platform but the Backs can give you a speed injection and cause huge problems for the defence. Centres Callum Smith and Ben Cottam, were two such players who caused problems and put us on the front foot time and again.

As we found ourselves camped on the Waterhead line, Murphy dived over for his third of the day, only to be denied by the referee who called a knock on. Was this the moment that the tides would turn?

Now on the attack, the Away side were offloading the ball after the initial contact and this led to another try. They even managed to regain the lead at 18-16 by adding to the try with the conversion. Bolton were now behind for the second time in the game.

The atmosphere was palpable, both teams were vying for the win and the onlooking spectators were being treated to a tense and thrilling battle. With this being the first game since restrictions had been relaxed, it was certainly living up to expectations.

Having been denied his hat trick a few moments earlier, Niall Murphy wasn’t going to stopped this time. A tackle bust in mid field by Will Bate saw him sprinting away towards the line, however, the Full Back did just enough to bring him down and stop the attack. But from there, Murphy was on hand to score his third of the game and put the Mets back in front.

On the hour mark, Full Back Sam Smith collected the ball from a Waterhead kick and immediately put us back on the attack. A break down the right touchline saw Smith hand off a covering defender before offloading to the support Ben Cottam on his inside. Outstripping the opposition, he was able to touch down to the right of the posts and gift Harte another easy conversion. Bolton now had another 10 point lead.

Obviously, Waterhead are top of the table for a reason and they weren’t going to stop knocking on the door. They had their fair share of big Forwards, and it was one of these Forwards that barged his way over to once again keep them within touching distance.

Having lost a couple of games this season to last minute tries, the Mets weren’t counting our chickens just yet. As we entered the last 10 minutes, the sideline thought they were witnessing another try, it all started when Will Bate passed the ball on to Lewis Howard, who then offloaded in the tackle to Paul Leigh. Showing a clean pair of heels to the opposition, Paul then passed back on the inside to Ben Cottam, but before he could pass on again he was chopped down by the Full Back. From the resulting play the ball, Sam Smith had a flit down the touchline but was bundled into touch before he could pass the ball back in field. With only 4 points in it, the nerves continued to ramp up for the Mets.

Bolton had looked lively all day, Will Bate was leading the way with ball carries and the next play proved why. His strength and pace saw him skittle a couple of would-be defenders after throwing a dummy to a supporting teammate, from here he put his foot down and crossed the line for his second, and Bolton’s sixth, try of the day. Making it 5 from 5 with the boot, Joe Harte made it 34-24 with only minutes remaining.

Within those final few minutes, Bolton Mets were able to send out our 10th debutant of the season. Coming on to the field, Damien Walsh, the son of Mets stalwart Neil Walsh, was eager to get his hands on the ball and if the pass could have found its way to the right corner then he would have probably been in for a try. Having trained with the club over the past couple of months, there is definitely more to come from young Walsh.

As the final whistle blew, the cheer from the sideline supporters was a delight to hear, and it was smiles all round for anyone connected to Bolton Mets. Beating a side who were top of the table, and who had only lost one game all season, was a fantastic achievement for the club.

Will Bate was named as Opposition MOM, closely followed by Niall Murphy and Ben Cottam, but it was the Top Tackler award going to Gavin Corfield that really pleased the Coach and Chairman. Gavin has come on leaps and bounds in the last few years and he is really showing what a quality player he has now become.

Due to Salford City Roosters A not being able to raise a team in our previous fixture, our next game should be at Home on 31st July, with double points up for grabs. This will all be confirmed ASAP. If the game is at Home, and we are 99% sure it will be, we would love to have as many supporters down to cheers us on as possible.

Thanks, as always, go to John McGibbon for taking the excellent photos that accompany this report, and of course, to our sponsors Greenhalgh’s Craft Bakery for proving the after match food. Due to the pandemic, this was the first time this season that we were able to offer both our players and the opposition the delightful sausage rolls, meat pies, cheese pasties, etc. I for one, had missed this as much as much as I had missed the rugby in 2020 and it was great to have them back as part of a game day routine.

Meeting at Greenhalgh's Pavilion @ Bolton Rugby Club at 1.15pm. All players changed and ready to warm up for 2pm