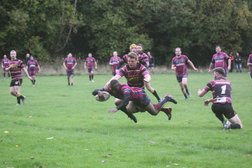 Boothtown Terriers made an excellent start in this titanic battle against Underbank Rangers. From the kick off they made several forward surges ending with Mark Sutcliffe taking several defenders over the line with him to score. Graham Charlesworth kicked the conversion.They continued to dominate and deservedly scored again when Graham Rowlinson took a lovely inside pass from Dez Morris to dive over the line,Charlesworth converted. This spurred Underbank in to action and they scored the first time they got into the Terriers half after 25 minutes. Having dragged the Terriers defence to the right they quickly shifted the ball for the left winger to score a converted try.
It was nip and tuck with both sets of forwards driving in and tackling ferociously with Ben Mallas, Craig Broadbent and John Mark Sawyer doing well for the Terriers. Underbank scored another converted try just before half time to draw level.
Underbank continued in the same vein and went in front with another converted try after 5 minutes of the second half. Seven minutes later Terriers levelled the scores when Scott LIndsey crashed over the line for Charlesworth to convert.With the match evenly balanced and both sides giving their all it took something special to break the deadlock. There looked nothing on as Arran Varley once again took the ball in in his own 25 but he somehow broke through the tackles and raced 75yds to score under the posts for Charlesworth to convert. This seemed to knock the heart out of Underbank especially when Graham Charlesworth scored a try of his own and converted it to give the Terriers a 12 point lead. Underbank tried hard to get back in the game but the Terriers resolute defence held out.
It was a good team performance with all 17 playing their part but Mark Sutcliffe took the man of the match award as Underbank struggled to stop him everytime he had the ball.
Share via
FacebookTwitter
https://www.pitchero.com/clubs
Recent news