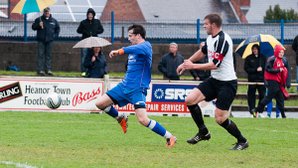 Title decider goes against The Vics

On a rain soaked pitch, this was always going to be a challenging game for two sides that like to play quality football. However everyone rose to the occasion in what should be the title decider.
Both sides had early chances. Steve Smith saved well with his legs, before the Heanor keeper, Neil West, flapped away a deep cross from Paolo Pilliero. The Vics then exerted a period of pressure and scored through David Hind. He latched onto a long ball, outpaced the defender, before calmly slotting home from 12 yards.
The Vics continued to have the better of play but a slick move from Heanor saw them create space wide on their right. The low cross being turned in by Ashley Grayson. Half Time 1-1.
The goal seemed to lower Vics spirits and it was Heanor who started the second half better. On the hour, a mazy run by Ashley Grayson was neatly finished to give Heanor the lead. The Vics continued to press but Heanor started to look threatening on the break. Sure enough a late third finished the contest and the Heanor fans celebrated jubilantly.
As for the Vics, the travelling supporters did the club proud, providing vocal and humorous support for the whole 90 minutes, despite the appalling weather and the defeat. Final score Heanor 3 Vics 1.
Share via
FacebookTwitter
https://www.pitchero.com/clubs
Recent news