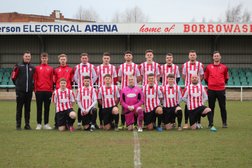 Goodwin hat-trick not quite enough at Regatta Way

There were mixed feelings at the end of Vic's trip to Regatta Way on Friday night. There was obvious disappointment at missing the chance to close the gap on the teams above them but also a fair helping of optimism following a much improved level of performance showcasing the potential of this exciting young side.
Twice they fell behind in the first half but on each occasion Charlie Goodwin scored an equaliser, his second goal the product of an excellent passing move starting from the defensive third of the pitch.
Goodwin completed his hat-trick and put Vics in front for the first time in the game after 57 minutes but West Bridgford's Ryan Whitehurst equalised on 70 minutes and completed his own hat-trick with a last minute winner to grab the points for the home side.