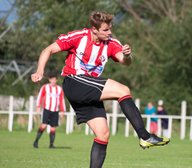 Comfortable win for The Vics

Non-League Day deliver a win for The Vics.

With new management team formally announced during the week expectations were high at the Watkinson Construction Bowl. This was heightened because Aylestone Park had conceded 19 goals in their opening 6 games and The Vics had started to score freely in the league.

The tone of the match was set in the opening 30 seconds. Straight from the kick-off, Callum Thompson played a lovely ball out to Ryan Baker, who had run in behind the right-back. He put in a teasing low cross that had the Aylestone Keeper at full stretch. The Vics were on the attack and they never let the pressure off in the opening period. After 9 minutes, Marc Finlay gathered the ball just outside the penalty area. He quickly looked up and curled a beautiful shot, which the ‘keeper could only watch, into the net to give The Vics the lead. 2-0 quickly followed when a break on the right wing was pulled back to Callum Thompson who’s shot, though not clean, was perfectly placed inside the ‘keepers right hand post.

The pressure was telling and boiled over when, in the course a few minutes, one of the Aylestone management team was sent from the dugout and a player was dismissed for foul and abusive language towards the referee. The disruption distracted The Vics and inspired Aylestone and they had the better of the next few minutes but when David Hind turned the left back and broke into the box on 33 minutes, his cross was perfectly finished by the in-form Marc Finlay to make it 3-0.
It could, and should have been more before half-time. The Vics were awarded a penalty when a powerful shot was blocked by a raised arm inside the box. The Aylestone players and bench pleaded that it was not intentional but the referee had made his decision. To the surprise of the spectators, who were expecting Marc Finlay to attempt to complete his hat trick, it was David Hind who stepped to take the kick. The delay seemed to affect him more than the keeper and his soft, low penalty was comfortably saved.

The second half was much less exciting, though no less skilful. Aylestone played a lot better and adopted a tactic of possession football without creating many chances. The Vics, with a comfortable lead already, were quite happy to let the ball be passed around in front of them. Both managers chose to make changes as the half wore on and this livened up the game as those players attempted to make the case for a starting place in future weeks.

A fourth for The Vics, and a third for Marc Finlay, arrived on 75 minutes. Using his strength in the box Marc made space and smashed the ball into the net. As 90 minutes approached The Vics could have scored more but either couldn’t hit the target or were thwarted by fine saves from the Aylestone keeper.