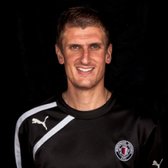 "Again we have had to show character and bounce back from a tough defeat in the league cup on Tuesday night. The lads knew it wasn't good enough and they have gone out there today and ground 3 vital points out at this time in the season.

Martin Smyth got his first goal for us which was great, even though it did come off his backside, but he and we aren't complaining as it was the winning goal. We had players back in to the squad today missing from Tuesday and that has helped us improve no doubt.

Dick has been more vocal in the dressing room today and his experience and knowledge of the game is only going to help the lads leading in to the business end of the season. We are still in the mix of the league title so 3pts was important today against a hardworking Holbrook side who always raise their game against us. We owed them one after the defeat earlier in the season so that was pleasing to get the victory today.

We now move on to Tuesday against Radcliffe Olympic who will again prove to be a difficult side on a tough surface, so lads know we now need to be on top of our game week in week out. The team that can string a run of results together between now and end of the season will be the team to win this league and to still be in the mix at this part of the season is credit to the players and their work rate and determination. We should also be going with virtually the same squad as Saturday which has been rare this season, but important with games coming thick and fast."