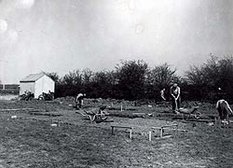 1. The History of Boston Rugby Club

Boston Rugby Club was founded in 1927 by Ernst Clark, a gentleman with an interest in giving his boys and their friends something to do, or rather something to keep them out of trouble.

The first 'home' pitch was off Rosebery Avenue in Mountains Field, an unused plot of farmland and the players turned out in blue and white hooped shirts, as they still do. After match entertainment was at the White Hart Hotel. The hotel provided changing facilities which were an old shed out the back which included a tin tank bath. However, this did not unhinge the players as they served a fine pint of Worthington 'E'! It was like drinking dynamite - a drop so powerful that Boston people could only drink it in 1/2 pints. Visitors however drunk pints and were worse for wear very quickly. Whitbread Tankard was sold at BRFC Clubhouse.

The club members were made up from local lads and those coming into the area seeking work. The RAF bases in the surrounding areas provided a strong influx of members which assisted in the growth of the club. Until the outbreak of World War II the club enjoyed the physical and social aspects of the great game of rugby.

During the war the club diminished, but reformed soon after. The club’s new 'home' pitch was again an unused plot of farmland; this time off Great Fen Road about 200 yards from today’s club home. Around 1948 the club was on the move again, this time to Wainfleet Road where the club used several pitches as they moved field by field as the farmers requested the use of their land back.