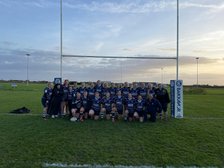 A well organised visiting Peterborough side emerged victorious after an extremely hard-fought battle at Boston on Sunday.
From the off, both side forwards went toe to toe, with huge hits and aggressive loose play, no quarter was given by either side. The game ebbed and flowed throughout the first half, with both teams having chances, only to be negated by fantastic defensive tackling.
Boston’s pack seemed to have the edge in the scrummage, however Peterborough balanced that with ascendancy in the line out. In the loose both packs were determined not to lose ground, the contest at the ruck a constantly fought battle, when the ball did go wide, the line speed was evenly matched as was the tackling from both three-quarter lines.
Defensive stalwarts on both sides being too numerous to mention, however Boston half-backs, Charlotte Daubney and Hannah Booth (Boston Back of the Match) martialled their troops well, leading by example and directing defensive operations. The back row of Lois Cooke, Cath Neville, Steph Beard and Mollie Smith worked themselves into the ground. Debutant Katie Berriman and opposite wing Tania Jones (Coaches Player) tackled well, supporting full back Sarah Simpson, who cleaned up the high balls throughout the first half. Jones going on later in the game to impress in the back row.
Centre partnership of Sherrie Christian and Lycia Elston, with replacement Charlie Ingram-Janetta, tackled hard, but just could not find a way through the Peterborough defensive wall, it was much the same for the opposition back line, no-one, seemingly, wanting to be held responsible for allowing a breach to occur.
The half ended 0 – 0.
The second half continued in much the same fashion as the first, until finally the deadlock was broken after several well-constructed phases in the mid field, resulted in a half chance appearing for Peterborough’s inside centre to power to the 10 metre line, from there several pick and go phases resulted in a short range score for the openside flanker Stephanie Warlow (0 – 7). Immediately after the restart the ball was recycled quickly over 3 phases and a short offload to the Peterborough inside centre, Eve Hilliam-Cooke, who powered through wide out and score. (0 – 12). Shortly after, Peterborough’s fly half put up a kick, which after an unfortunate bounce, left the Boston defence stranded, and the ball regathered and converted wide by winger Penny Woods. (0- 17).
Not used to being in this position, Boston’s efforts redoubled, and from the restart Boston’s invigorated attack emerged with renewed energy, the side seemingly resurrected from the pyre. Lycia Elston creating her own gap from a clever offload in the tackle from Booth, powered down the right-hand side of the pitch only to be stopped 10 out, by a determined tackle from the left winger. However, a rejuvenated Boston pack were in the ascendancy and quickly recycled the ball, for Daubney to distribute to a wide pod, who were stopped only 5 out by a high tackle. There was only one option from the penalty, and Daubney popped the ball on to a rampaging Max Heely, and from 5 out the result was never in doubt, the powerful loosehead chalking her second try in 2 weeks. (5 – 17).
Boston continued to press with 5 to go, unfortunately ill-discipline caused by frantic attempts to re-gain possession, resulted in a succession of penalties awarded to the visitors, allowing them the field position from which to extract ‘last blood’. With again the ball pushed wide quickly for replacement Gemma Carter to finish in the final minute of the game. (5 – 22).
Boston’s front row combination of Heeley, Champion and Clark (All 3 nominated Boston Forward of the Match) really stepped up to the plate, performance wise, and will, given time, mature into a phenomenally powerful unit. Second Row powerhouses Arlene Moxon supported by Claire Wright and Bec Mindham-Wright tackled themselves to a standstill. The Back-line finishers Nicola Collyer, Jody Stobart, and Orinta Mason all contributed massively to the defensive effort, with Nick Collyer new to the game tackling hard and with great effect.
Reflecting post-match, Boston Captain, Hannah Booth said ‘I am so proud of our girls today. They stuck to the task so well, they always give their all for the team and they are a fantastic group of women. Our tackling and forwards were immense. Credit to the Peterborough girls, they came with great intensity, that was without doubt the most physical encounter we’ve had for ages, and they thoroughly deserved the win. We know we need to go away from this, hit the ground running in training on Tuesday, and learn the lessons we need to learn.’
Coach Shaun Turl said of the performance ‘Penalties cost us dearly today. We cannot expect to deliver a fluid game plan when we are on the receiving end of such a high penalty count. That said I thought our forward pack were great today, they were dominant in the scrum, and sorted the line out quickly.
Peterborough turned up today with their ‘A’ game and, obviously smarting from their loss to Lincoln a fortnight ago; they were disciplined, well organised, and took their chances well, they are fully deserving of the win. What we need to do, is follow that example. We need to train hard over the coming weeks, work hard at reducing the penalty count and go to Lincoln in two weeks, ready in all respects for another titanic encounter’.