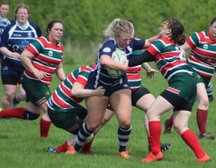 Jess Pearce grabbed two tries for Boston and Sydney Elston scored one, while Hannah Booth added a conversion and two penalties to seal victory for the visitors.

Lincoln squandered four great chances to score inside the first 20 minutes of the match, and it was Boston who took the lead via a Booth penalty.

Lincoln hit back as Twesigye broke through the midfield from just over the 22 before sidestepping a tackler and outpacing the covering defence. One of the Boston players managed to get back to stop the centre a metre out from the try line, but the force of the tackle saw Twesigye bundle over to score.

The hosts increased their lead when Bierton ran onto a kick over the top from Twesigye. Boston then fumbled the ball before Bierton kicked it forward towards the try line and dived onto it to score.

Boston reduced the deficit after a big crash pod from a lineout led to a well-worked backs move, which set up Pearce for a try in the corner.

Pearce was soon in again as after hard work from the forwards set her up to power over for a try from five metres out.

Lincoln edged back in front after decent work by the forwards down the left-hand side put the hosts in a decent position around 10 metres out from the try line. A well-orchestrated move through the backs set up Brooker-Brown to go over for a try near the corner.

Boston took a narrow 16-15 lead in at the break after being awarded a penalty. Booth converted the kick at the second attempt after the first one was charged down by Lincoln.

Lincoln spent a lot of the second half attacking and were held up twice, as well as being denied by a knock-on near the try line despite no defence in the way.

Lincoln continued to chase the win as the tired legs of Boston continued to be tested, but the visitors’ defence once again held strong.

Boston extended their lead to eight points in the final quarter of the match as Booth’s chip over the top was gathered by Pearce. Pearce looked certain to score her hat-trick, but was tackled just short of the try line.

The ball was quickly recycled and Lycia Elston drew the Lincoln defence in before offloading for Sydney Elston to go over for a try, which Booth converted.

Lincoln came back strongly and piled more pressure onto Boston. With the last play of the game Lincoln had a free-kick, but Boston’s defence held firm and another turnover from Hannah Dennis secured victory for the visitors.

Boston Ladies head coach Paul Beard said: “I am really happy with the efforts out there. After a long period away from the game, we were using this period of games to try people in new positions and bed some new players into the game.

“So to perform this well in the early stages on our next step I’m very proud. The girls showed heart and determination against a powerful Lincoln side.”

BACK OF THE MATCH – Abigail Lee

FORWARD OF THE MATCH – Ella Frow

OPPOSITION’S CHOICE FOR LINCOLN PLAYER OF THE MATCH – Ella Frow

BACK OF THE MATCH – Lycia Elston

OPPOSITION’S CHOICE FOR BOSTON PLAYER OF THE MATCH – Hannah Dennis