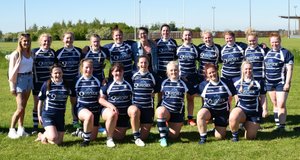 From the off, Boston Ladies set the stage for another impressive performance, with an aggressive defensive line. Lead, superbly, by Hannah booth the Boston team knocked back Kesteven time and time again in possession.

Amy Whitaker and Hannah Dennis both put in inspiring performances with dominant tackling and repeated jackaling, from which one on 13 minutes, saw the Boston pack steal the ball and powerful running from Sophie Lorenz, (voted Kesteven’s player of the match) and Mollie Smith, set up Arlene Moxon to attempt a crash from 5 metres out, cast even held firm but quick ball from the ruck allowed Syd Elston (Back of the Match) to gather the ball and finish powerfully from short range.

For the next 10 minutes Boston attempted to force play unnecessarily, resulting in temporarily scrappy, inaccurate play. However the on-field leadership team most notably, Hannah Booth, Tash Champion, and Charlotte Daubney, rallied the side and from then on the performance improved.

Exciting interplay between forwards and backs on 23 minutes, saw the impressive Mollie Smith crashed through the defence and back herself and speed to score from 30 yards out under the posts.

This then inspired the ladies to put in, arguably, their finest performance of the season with both forwards and backs combining to allow Hannah Dennis, to cut a swathe through the Kesteven line, only to be denied an excellent try at the last gasp by a huge tackle by the Kesteven full back.

Within 5 minutes the attack was on again this time the ball flowed through 10 pairs of hands before Boston were again denied, this time by an errant pass at the last gasp. The back row of Smith, Lorenz and Lois Cooke, (Boston’s Forward of the Match) tackled ferociously throughout and when a spilled ball resulted in a Boston ruck, the ball sped out to Booth who deftly sidestepped the defensive line to storm over for a fine individual try.

But the ladies saved the best until last. After another steal, Daubney, who is maturing into a fine scrum half, quickly supplied Booth who deftly chipped the ball over the defence, superb chasing by both Cooke and Dennis, resulted in a jackalled ball. Again fine handling and exciting interplay, saw Lycia Elston seal an impressive individual performance with a superbly finished final try on 56 minutes. Booth added to her season tally by converting three from 4 conversions.

Kesteven ladies were on their first outing of the season but looked well organised and tackled powerfully, coming close several times to puncturing the Boston defensive line. However the Boston defence remained belligerently solid throughout and even when Lycia Elston and Lorenz were yellow carded with 15 minutes to play the remaining 13 tackled like lionesses to keep Kesteven out. Notable performances from the returning Lucy Buckberry, whose presence always seems to calm her teammates, Steph Beard (Coaches Player of the Match) and Tania Jones in addition to Boston’s developing new players; all contributed to this overall team performance.

The afternoon saw a fine example of women’s rugby with an exhilarating display at times from both sides the ladies to a player display displayed strength courage and determination and the performance was one of Boston's finest to date,

Next up for Boston it is a trip to Lincoln next week in the first round of the NLD area cup. We would encourage any of you to come over and support this amazing developing group of players.