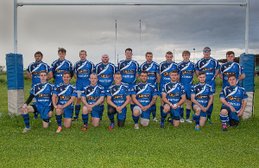 Boston Buccaneers RLFC is a Rugby League club from Boston, Lincolnshire. The Club was formed by friends Mark 'Beany' Bean and Mark Cleaver in November 2013 and are based at Boston RFC, Princess Royal Sports Arena. The Buccaneers were initially to participate in the Midlands Merit League. In 2014, after recruiting coach Tony 'Bones' Holmes, the Buccaneers played two friendliest against local Royal Air Force Teams Coningsby and Waddington. The first competitive game of the 2014 season was away at Derby City a game which saw the Buccaneers post an impressive 48-14 victory with Dave Beever scoring the Buccaneers first ever try. After a 36-22 victory at home against fellow new comers the Sherwood Wolfhunt the Buccaneers were invited to play in the maiden Merit League Final appearance loosing 34-16 to the Buxton Bulls.

2015 saw the Buccaneers being invited to join the Midlands Premier League. After a frustrating season due to cancelled fixtures the Buccaneers ended a creditable 5th. Finishing in 5th spot guaranteed the Boston team a home plate semi final. In a superb 58-20 win over Derby City the Buccaneers booked themselves a final vs Sherwood Wolfhunt. After going into a narrow lead the Game ended in a draw and was sent into 'golden point'. A penalty secured victory to Sherwood 30-28.
Captain Craig Dowse and 2nd Row Dave Beever were both selected to tour Greece with the Midlands Lionhearts.

2016 saw an impressive performance from a resurgent Buccaneers Squad. Leading the league with individual points and tries scored and with an impressive 7 wins the team booked themselves a semi final against Coventry Bears. As seems to be the case in semi finals the Buccs came off second base. Captain Jim Dearing, Dan Mackie and Steve Kippax were all selected for the Midlands Lionhearts tour of Spain.

2017 was our third year competing in the Midlands League. Very much a rebuilding year with players leaving the area and retiring. However, we achieved a creditable play off place – but elected to withdraw due to travelling and player availability (players returning to union clubs for pre-season).

2018 was our fourth year competing in the Midlands League. We achieved a creditable play-off place – but were defeated by a strong, well drilled Birmingham Bulldogs outfit who went on to win the Cup. The Buccaneers also represented the Midlands league in the inaugural London 9s tournament - a great day out for the lads.

2019 was our fifth year competing in the Midlands League. The season saw us make the inaugural Midlands Challenge Cup Final narrowly missing out to a strong, well drilled Sherwood Wolfhunt who also went on to win the league. A low point for all in the club was the tragic death of talented player and friend 'Scotty' Stevenson. He will be sorely missed. As a mark of respect his #1 jersey has been retired for the 2020 season. Finally, four Buccaneers claimed Midlands caps, John Stanfield, Jack Rules, Rory O’Sullivan and Jordan Cleaver. In a first for the club, John Stanfield was selected for the Southern England Lionhearts.

The clubhouse is the focus of the social side of the club. With the latest addition of two 50" plasma televisions all games can be viewed in style. The bar hosts everything from informal drinking to annual presentations and the club is also available for hire for birthdays, weddings and other events.