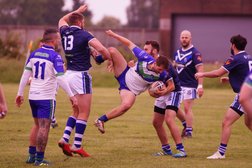 Great all round performance from the home side

The Boston Buccaneers demolished local rivals the Nottingham Outlaws in a superb nine try display to record their first victory of the 2019 campaign.

Coach Jim Dearing had the luxury of being able to call on a full squad welcoming back Jake Keeton into the team for his first game this year. The travelling outlaws team started brightly and after only 4 minutes a succession of penalties put them within 20 metres of the try line. A clever grubber kick saw the visitors dab down in the corner for the go ahead score. That was to be the last time the Outlaws would score as the resurgent Buccaneers came to life. Despite some possession the outlaws failed to make ground thanks to some crunching tackles by Wilson, O'Sullivan and Cleaver. When the visitors kicked away the dependable full back Stevenson was on hand to run it back giving the Buccaneers great field position. Simple mistakes however denied the Buccaneers the score until the 30th minute when centre Jordan Cleaver ran a great line to score under the sticks, John Hummel adding the extras. The resulting kick off saw full back Stevenson run the ball 50 metres then cleverly off loaded the ball to a rampant Keeton who swept past defenders finally releasing Brad Nixon to dive for the score, the extras again added by the boot of Hummel. The half ended with the Buccaneers leading 12-4.

The second half was all one way traffic. Any Outlaws pressure was met with a wall of blue. Ferocious tackling from 'Butch' Lucas, Keeton and Wright snuffed out any hope of scoring for the visitors. With ball in hand the Buccaneers found their mojo. After barely 3 minutes the home side had marched down the field thanks to Wright and Wilson and were within touching distance of the goal line. It was captain John Stanfield who seized the ball and dived under defenders to score from close range, again the extras made by Hummel.

The Buccaneers forwards were now dominant with Rich Lloyd and Dan Philpott smashing the ball up the middle. Prop Harry 'cho cho' Atkinson was running over would be defenders for fun. It wasn't long before Jake Keeton stretched his legs down the side line for a fine individual effort, the blustery conditions denied Hummel of the extras. 5 minutes later Keeton was again on the scoresheet popping up on the opposite wing after being put in the clear by hooker Brad Nixon. Despite the poor weather conditions the backs ball handling was superb with Underwood, Nixon and Stanfield distribution excellent, centre Jack Wright stormed his way past defenders and dived in the corner to score again Hummel failed to add the extras from out wide. With the score sitting at 30-4 the expansive rugby on show from the Buccaneers saw no signs of stopping. Again the safe hands of Stevenson under the high ball gave Buccaneers great field position. Wilson carved his way up to halfway, Cleaver saw half a gap and scooted for 20metres before passing to Nixon who finished off the move under the posts, on form Hummel added the extras. With 5 minutes left winger Chris Cook found some space along the sideline with only a desperate tackle preventing him from scoring however the ball was kept alive by Nixon who in turn found prop 'Butch' Lucas in support. Lucas would not be denied the sore and carried hapless defenders over the line with him, the extra point agonisingly hit the upright. With time almost expired it was only fitting the fullback Scotty Stevenson score the final try after a superb catch and run, Hummel added the extras.

Man of the match was Jake Keeton for his tireless work both with ball in hand and solid defending.

Sent from my iPad