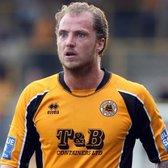 Boston United travel to Altrincham on Saturday to renew acquaintances with one of their oldest Conference rivals (kick-off 3.00pm).

The Pilgrims have enjoyed many duels with Altrincham over the years — although the two clubs have not met since February 1999 when two goals from Paul Watts booked United a place in the FA Trophy quarter-finals.

The Robins were relegated from the Blue Square Bet Premier in the summer — having incidentally been handed a reprieve from the drop when the Pilgrims were demoted in 2007.

United travel to Moss Lane with an 18-man squad at their disposal — including new signings Craig Armstrong and Sam Mulready.

Alan White and Chris Hall should both return from illness for the trip to Greater Manchester.

Injuries are set to rule out Lee Canoville (knee), Tom Ward (ankle) and Mickey Stones (knee), while Liam Parker is likely to feature for United’s reserve team once again.

Fancy a flutter with league sponsors Blue Square Bet? The leading online bookmaker have Altrincham down as 11/10 favourites on Saturday, with the Pilgrims at 2/1. The draw is 12/5.