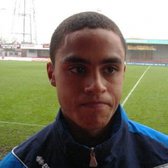 Fairclough joined the bufc.co.uk cameras to reflect on an afternoon to forget in Greater Manchester.

Fairclough, whose elder cousin Ben made his full league debut for the Pilgrims at Moss Lane, was shocked to see United concede six goals.

The former Nottingham Forest trainee admitted that he was pleased to start the match, but by the end of the 90 minutes was desperate to hear the final whistle.

He also previewed Saturday's trip to Histon and bouncing back.