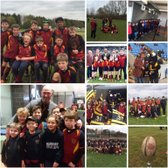 The curtain came down on a great season for the U9s at a star-studded afternoon awards ceremony.

In a nice touch from the club all players were asked to bring along those people who had given then so much support this year. And in a show of unity and team spirit all the players brought along their families. It was nice also that they eschewed the usual awards attire of black tie and glittering dresses choosing instead to wear more relaxed and casual shorts & shirts.

Having pressed their way through the usual throngs of well-wishers and paparazzi the players and their supporters revelled in the informal setting of Queens Park on a sunny Sunday afternoon before the awards themselves began.

Unfortunately Eddie Jones was unavailable to present the awards as initially hoped but erstwhile Bournville legend (and current Director of Rugby) Richard Underwood was on hand to do the honours.

Most Improved Player
Shortlist - Rhys and Callum.
Winner - Callum. Starting the season a little late which meant that he also missed the gruelling pre and early season training put Callum at something of a disadvantage. He was not helped also by having no prior experience of rugby. But his diligent efforts in training and the way that he listened to the coaches meant that he finished the season in style. He was constantly a strong and direct runner who presented a formidable challenge for would be tacklers. And in addition his own tackling was robust and uncompromising. As festival season approached his handling improved and he was one of the stars in our runners-up performance at Birmingham Bees.

Rhys too was a constant and effective presence with great tackling skills allied to a great team ethic.

Well done to Callum for his deserved award though.

Player of the Season
Shortlist – George, Jacob, Mason, Matt, Rory M, Will T
Winner – George. George could have won this award for his defence alone. His tackling has been utterly fearsome all season and on occasion opponents (internal and external) became nervous about daring to make a solo break in case they got “Georged”. His defensive performance at the Leicester Festival prompted the Leicestershire County Referee to seek him out to shake his hand and urge his parents to look after him. And 2 try saving hits against Droitwich at their Festival effectively became tournament winning moments. And in attack he was no less impressive especially as the season progressed and he learnt to pass more. A talismanic performance and utterly deserving of his award.

Coaches Award. During the discussions around Player of the Season for the last 3 years one person has always discussed and always just missed out on the award. This season that player again pushed George close with his attitude, twinkle-toes running and wholehearted tackling. The coaches decided that they would like to reward with Mason with a special Coaches Award in recognition of his constantly high standard of play.

And with that the season came to an end.

A season of record numbers of registered U9 Bournville players, of a burgeoning team spirit, of an emerging style of Barbarian type running and passing rugby, of trips to Wasps & Leicester and chance meetings with legends, of being Guards of Honour at The Ricoh and Bournbrook, of happy smiling faces and of some success on the pitch.

Well done all. Enjoy your Summers and come back well rested ready to do it all again!