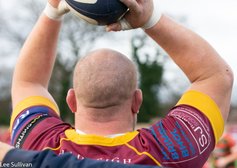 The month of December sees Bourns take on the three teams immediately below them in Midlands Premier. The first of those was fourth placed Sandbach who have a habit of dispatching sides above them, as they visited Avery Fields. No rain, clear conditions, no mud in sight, but a tricky wind to deal with blowing straight down the pitch away from the club house.

The usual injuries, unavailability, and tactical selections saw a few changes to last time out. James Burgoyne came back in at loose head with young Scott Rudge reverting to the bench. The experience of Adam Caves saw him at hooker. In the back row, captain Steve Handy found himself covering number 8 whilst Matt McKeown started at 6. The only change in the backs was the return of now fully fit full back Owen Williams. The rest of the bench was Zane Raimondi and centre John Hargreaves who is available for a short period of time.

The first quarter of the game saw both defences on top. Their was a willingness from both sides to get the ball moving but no real clear cut chances were created other than a clear two on one chance where Owen Williams was unable to hold on to the pass and Mitch McGahan saw a penalty chance go across the face of the posts. The visitors were getting plenty of possession from their line out and from such a possession, the visitors backs carved out an opportunity for a well worked try and well converted for a 7 nil lead. This soon increased to 10-0 after a scrum penalty, so game on.

Bourns changed tack and started to get the forwards carrying around the corner where the burly second rowers Sam Herrington and Tom Holliday backed up by the front row, applied the pressure in the Sandbach 22. On 27 minutes, Mitch kicked an easy penalty chance and the Bach try line was soon under pressure again with the backs and forwards combining well. A red zone offence by the Bach winger on 35 minutes proved pivotal. Weaver crossed the line but couldn't ground the ball. The resulting scrum was held and a few phases later, Herrington crashed over. More pressure in the remaining minutes of the half saw Bourns score two more tries from similar play as firstly Holliday bullied himself over and Herrington got a second. With Mitch kicking two conversions, Bourns suddenly had scored 22 unanswered points going into the break at 22-10.

Bourns had the wind and played territory. The driving lineout was going well and the scrum was starting to dominate and Bourns said to Bach, score from deep in your own half against the wind. The visitors handled well under pressure but could not breach the Bournville first line of defence. Finally as the game entered the final quarter, the Bach Backs created an opportunity and the left wing had a 40 meter sprint to the line. Que from the opposite wing Ethan Walker who sprinted across the pitch and made a try saving tackle dragging the winger into touch inches from the try line. Both sides lost a forward each in quick succession with 15 minutes to go for high tackles with Matt McKeown resting for 10 minutes. The game was done just before the 70 minute mark when the try of the game occurred with the Bourns backs and forwards stretching the over worked visitors defence from side to side. A long miss pass from a quick ruck from Ben Tibbetts saw winger Ethan in attacking mode who sprinted in.

Sandbach continued to try and run out from deep, but a loose pass was grabbed by Sam Herrington who sealed his star man performance as he took the ball into contact and off loaded to Owen Williams for the final try. Final score 34-10.

A top performance from all the team against a tidy and dangerous team who could beat anybody in this league. Bourns are still unbeaten 11 from 11 as they open up a 7 point gap at the top of the table with next weeks opponents Sheffield lying second having lost just one game this season. A huge test for the team as they travel to the Steelers in South Yorkshire.

Now that the nights are drawing in, you will see a distinct difference between the photos from the 1st and 2nd halves. My cameras are good but not that good, so there will be more noise in the later photos. Another stunning excuse for any deficiencies in this weeks batch, but take a look HERE and decide for yourself.

Once again can I ask nicely if they are used on any other site can you not crop them any further and use them as is. I have spent hours straightening and cropping where necessary. They look fine as they are. For private use - feel free to do what you want of course.