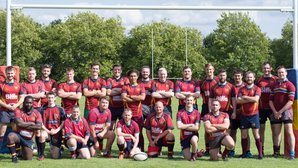 Sully's view from the side.

The start of a new season, but Bournville 3's look set to carry on where they left off last season.

Just a reminder, this is not the official match report, but just a few jottings on what I saw through my lens.

Bournville started against the wind and up the slope. Erdington had a much heavier pack which allowed them to dominate the early scrums.
Both sides played to an excellent standard and the score was tight and each had the win in their thoughts.
With the slope equalising the scrums in the 2nd half Bournville made good use of their strengths and started to take control.
Once again I witnessed a Bournville try that would have been appreciated at any level of rugby. The move began deep in Bournville territory with several breaks through a couple of decent half tackles and some slick handling resulting in a superb try under the posts. Not often do you hear the opposition applauding.

Fair play to Erdington, they contributed to an entertaining game and but for a few spilt passes could have got closer to the Bournville score.

Well worth the entrance fee.

So the photos - quite a few here. Apologies for the Bournville team photo. I was forced to use my 1st shot as in the other half a dozen, at least one person per photo decided to either close their eyes or compete for a gurning competition.

Take a look HERE for the link

PS Apologies to anyone who downloads a photo ( I know there must be some out there :) )
Apart form the two team photos, I have accidentally uploaded the photos in low resolution for display over the web, however the download quality won't be that great ( I think). Email me if you would like a specific photo - your secret will be safe with me....