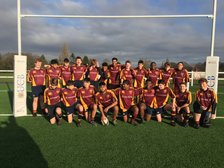 Another beautiful Sunday morning saw Moseley U16s come to the University for the first time in a few years for the first of our eagerly awaited two matches with them this season.

I won't give a blow by blow account of the game but will simply provide some observations from the touchline.

From the off, Moseley showed they had come with a forward dominated game plan of trying to batter their way down the pitch going from ruck to ruck. They clearly had some sizeable forwards to throw into this plan, however, lose control of the ball or have it move away from the area of forward strength and your plan can unravel fairly quickly.

The Bourns pack more than held their own this morning and tackled their hearts out. Max Jeavons standing out yet again and profiting with 2 very well deserved tries, the first after 3 minutes and the second on 10 minutes.

Moseley had been coached very well at stealing our ball at breakdowns and this is an area where Bourns really need to improve. Likewise Moseley seemed to be better at dealing with the hammer on our own ball - again perhaps something for us to think about and learn from.

However, in terms of forwards and backs combining to turn defence into attack and to counter attack from anywhere, Bourns were the better team. Bourns backs seemed more comfortable with ball in hand than their Moseley counterparts and the first half saw some lovely back play supported by robust forward tackling and rucking. Dan Black was able to benefit from this to release the backs for wave after wave of attacks.

Jack Simpson had a near perfect game and was rewarded with an interception when Moseley were threatening to run from deep in his own half to score under the posts - gas on full today Jack.

So, other scorers in the first half were Andy Wade on his return from injury and the class act that is Matt Gissen.

Something was clearly put in the Moseley water bottles at half time and they came out like a different team after the break. Much more robust and energetic. They had more territory and tried to release their backs into the game far more than they did in the first half. Heroic defending on the Bourns line kept them at bay on several occasions with both Dan Black and Ben Crofts clearing the ball from the 22 to safety.

Andy Wade scored his second on 13 minutes - his usual direct running style was on full show today and great to watch.

Moseley then broke through the Bourns lines with their left winger beating several men including a last ditch attempt from Will Pettifor to score on 25 minutes.

The final 10 minutes saw Bourns drop the ball over the line twice ! but also score two very well worked tries - one for Dan Black and another for Dylan Rogers, now having swapped to the wing.

So, final score 54-7 to Bourns. A comfortable enough win but all the coaches feel there is still more to come from the team - slightly less selfish play by seeing and using overlaps when close to their line would have added considerably to the score. Use the overlaps boys and watch the difference it will make.

I'm sure everyone; players, parents and coaches alike will wish Jacob Pritchard a speedy recovery from his dislocated knee sustained in the second half.