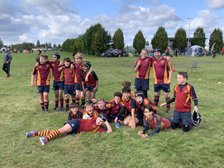 A fantastic Sunday for Bournville Boy's U12.

Sunday was the last time this group of players would participate in the Moseley festival, our traditional opener for the last 6 seasons. Having ended last season’s festivals with some fantastic performances, hopes were high, and the coaches are proud to say that the squad did not disappoint.

The team played 4, won 4 without conceding a try all festival, with great defensive work near our try line on numerous occasions, underlining the bravery and commitment from each player. Everyone played their part in what was the best team performance the squad has put in and the elation felt by the players, parents and coaches at the last final whistle was genuine and heartfelt. In particular, the game against Telford was a fantastic demonstration of sheer guts and determination against a side who were considerably bigger than us, had visited Avery Fields last year and given us a lesson or two in how to play as a team.

Everyone in the squad put in a great shift with the rotation of players across the 4 games working well to ensure everyone had decent game time, were kept fresh across the festival and all involved until the last game. Congratulations to every player in the squad!