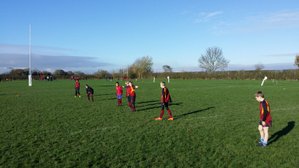 A strong performances by over 35 players resulted in 3 victories for BRFC U9’s vs Berkswell & Balsall RFC on a fresh but sunny day in the Warwickshire countryside. Our hosts were very welcoming and all the players made contributions with the ball in hand and tackling – we are seeing definite improvement in our defensive lines and running through the tackle, although more work required with:

An impressive performance, with the team holding (on the whole) a strong defensive line which B&B struggled to come to terms with, they were able to force B&B backwards and win turnovers with the likes of Matt & Ollie finishing well at times, the support play was good and with more passing to players in space the performance could have been even better

A close game but a solid 7-4 win for the Rangers. Freddie G was leading the tackle count closely followed by Mason who also finished well

Good in attack with strong running and their passing improved as the match went on. When the mood took them they were ferocious in defence, flirting with the offside line and pushing the opposition back beyond the gain line time and time again. Work still needs to be done in defence once the opposition made the breakthrough and we were running back towards our line.

Players of note.
Archie – some excellent finishing & good cover tackling
Ryan –strong running through the tackle resulting in a try and a couple of tackles forcing the opposition backwards
Jay – One of Newcomer with lots of enthusiasm. Did not shirk a tackle all day.
Alex B – Great performance with ball in hand and made all his tackles.
Joseph - excellent tackling & support play, often in support first to act as scrum half