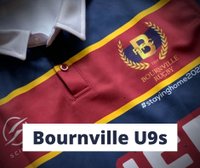 Bournville prove to themselves that size isn't everything.

Some incompetent and amateur Head coaching from yours truly meant that not everyone got to play 2 games against Kings Norton. My apologies to all. But I also know that the intra-Bournville games were no less important or competitive. No doubt this is not a mistake that our Director of Rugby would make!

Anyway we won the day and there were a lot of positives in our performances and efforts in all the games.

Both Kings Norton teams had some big players (Editors note: Please can players concentrate harder on growing) which did unsettle us to start with as our lads where still trying to tackle upper body instead of below the waist/legs.

1st Game:
9-9 draw - Took us a while to get started but some great runs and passing and the tackling got better in the 2nd half.

2nd Game:
9-3 lost - Again the team did their best against a big tall team. Unfortunately they just got on top of us and didn't let up.

In both matches Seb, Ryan and Alex stood out with their wholehearted efforts and skill.

First game of the New Year and a great opportunity to apply some of the defensive and offensive skills that we've been honing in the training drills. Kings Norton offered a significant physical challenge. Country air and fresh produce has generated some 'best in show' type individuals. Even the referee felt a little menaced. It is to the team's credit that some awesome defence had the team 4:3 up at half time. Will v and Callum put in a number of great hits and George weighs in with his usually flying last gasp tackles to snuff out a lot of the Kings Norton attacks. Particularly impressive were the number of turn overs after defending 6 tackles.

With ball in hand we saw some good running from Jack with Oliver and Lucas looking to take things out wide, although straying a little too close to the touch line on occasion but the intent was good. Alex distributed the ball well from the breakdown and his tackling grew with confidence through the morning. Oliver also weighed in with a solid defensive effort although occasionally strayed offside in his enthusiasm to take his next scalp.

In the second half we were guilty of some soft turnovers that saw the game swing back in Kings Nortons favour. Some solid carrying from Will V and Callum in particular helped steady the ship and some good offloads and passing freed up George to weave his way over the line to ultimately secure a draw (I think)

Our other games were with Bournville opposition and were very much played in the same combative fashion. As a coach there was a lot to be pleased about. The development has been impressive and they played as a team and with a lot of heart.

Bournville Sharks were unbeaten; drawing two fiercely competitive games against other Bournville teams and a convincing victory against a much bigger Kings Norton team.

The most impressive thing of the day was the never give up attitude whether in attack or defence. Against one Bournville team they were three tries down but managed to pull it back for the draw.

Strong running and tackling in every game from Matt H, Tom H, Charlie M, and Elliot. In their last game against KN Matt H was almost unstoppable and Elliot and Tom H consistently broke through tackles. New boy Tom came into his own in that game with lightning pace down the wing. Overall all played well as a team!

Like the other teams we were initially a little taken aback by the size of the opposition but we shouldn't have been! In the first game and first half we did drop off the tackles as Kings Norton ran very directly at us but we kept in the game by scoring everytime we had the ball. In fact the way that we ran and handled the ball was really quite impressive. In the 2nd half though the boys benefitted from some raucous parental support and defended their line with increasing confidence. Will T and Rory M seemed to really enjoy tackling in pairs and Kings Norton could not get their big boys running at pace. By contrast we did and they started to fall of us in attack with Rohan to the fore and we ran away with the game.

The team clearly enjoyed their efforts and repeated the dose in the second game. Again shutting down their tall players and scoring whenever we had the ball.

This was as good a team effort as I have seen all season and all the more pleasing because it was the players themselves who saw what needed to be done to win the game.

Moseley next week! We need more of the same!